2. If positively charged pendulum is oscillating in a uniform electric field as shown in figure. Its time period as compared to that when it was uncharged:

(C) will not change

(D) will first increase then decrease

3. A and B are two concentric spheres If A is given a charge Q while B is earthed as shown in figure :

(A) The charge density of A and B are same

(B) The field inside and outside A is zero

(C) The field between A and B is not zero

(D) The field inside and outside B is zero

4. The maximum electric field intensity on the axis of a uniformly charged ring of charge q and radius R will be

5. The figure is a plot of lines of force due to two charges q1 and q2.

(B) Upper positive and lower negative

7. Electric charge q , q and -2q are placed at the corners of an equilateral triangle ABC of side L. The magnitude of electric dipole moment of the system is

8. Three identical particles of charge Q and mass m are placed such that they form an equilateral triangle of side l . If they are released simultaneously. The maximum speed attained by any one of the particles will be

9. A point charge q is placed at a point on the axis of a non-conducting circular plate of radius r at a distance R ( >> r) from its center. The electric flux associated with the plate is

10. In the electric field due to a point charge q, a test charge is carried from A to the points B, C, D and E lying on the same circle around q. The work done is

(A) the least along AB

(B) the least along AD

12. A thick shell with inner radius R and outer radius 3R has a uniform charge density σ c/m3 . It has a spherical cavity of radius R as shown in the figure. The electric field at the centre of the cavity is

13. The electric potential energy of a uniformly charged thin spherical shell of radius R having a total charge Q is ‘

14. Two small metallic spheres each of mass ‘m’ are suspended together with strings of length ‘l’ and placed together. When a quantum of charge ‘q’ is transferred to each the strings make an angle of 90° with each other. The value of ‘q’ is

15. Two concentric spheres of radii R and r have similar charges with equal surface density (σ). The electric potential at their common centre is

16. Two connected charges of +q and -q respectively are at a fixed distance AB apart in a non uniform electric field whose lines of force are shown in the figure. The resultant effect on the two charges is 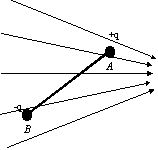 17. An electron is accelerating in gravity free region in the absence of an electric field. It will lose its energy in form of

(B) loss in gravitational potential energy

19. The figure shows an infinite line charge of density σ C/m. The work done by the electrostatic force on a `unit charge, when it is moved along the path ABC, is (plane of the curve ABC contains the line charge)

20. A charge ‘Q’ is placed at the centre of a hemispherical surface of radius ‘R’. The flux of electric field due to charge ‘Q’, through the surface of hemisphere is