They are normally used for the purpose of lifting ferromagnetic substance.

Properties of the material of an electromagnet :

(1)  The material should have low retentivity so that it gets demagnetised easily.

(2)  For the electromagnet to be very strong, it should have a high value of saturation magnetisation.

(4)  Hysteresis loss should be small. It should not be heated up during magnetisation and demagnetisation.

The above-mentioned properties are reasonably met with soft iron and so soft iron is usually preferred for an electromagnet.

Properties of the material of a permanent magnet :

(1)  It should have high retentivity so that it remains magnetised in the absence of the magnetising field.

(2)  It should have high saturation magnetisation.

(3)  It should have high coercivity so that it does not get demagnetised easily.

Note:Compared to soft iron, steel has got low retentivity. Even then steel is preferred for a permanent magnet as it has got high coercivity.

As the materials used for making transformer cores are subjected to many cyclic changes per second, so they are preferred to have low hysteresis loss. Moreover magnetic field B should be large. As soft iron shows these properties, hence it is always preferred to develop transformer cores.

Eddy Currents :
Eddy currents are the currents induced in the body of a conductor when the amount of magnetic   flux linked with it changes. The experimental concept was given by Focault and hence they are also named as Focault currents.

Special points:
(1) These currents are produced in metal bodies

(a)They are placed in a time varying magnetic  field .

(2) These currents are produced only in closed path within the entire volume of metal body or surface area of metal body. Therefore their measurement is impossible.

(3) These “circulatory” currents are always produced in planes perpendicular to magnetic lines of force.

(4) The resistance of bulk conductor is usually low, eddy currents often have large magnitudes and heat up the conductor. That’s why these are sometimes undesirable.

(5) By ‘ Laminations ’ , slotting process, the resistance path for circulation of eddies increases, resulting in to weakening them and also reducing losses caused by them. Slots and laminations intercept the conducting paths and decrease the magnitude of eddy currents. That’s why a laminated metal core is always preferred to be used in an appliance like dynamo, transformer, choke will etc.

(2)If a metallic plate is below an oscillating magnet, then magnet stops soon because eddy currents are produced in the plate which opposes the motion of magnet. This is the basis of electromagnetic damping.

(3)  If a bar magnet is falling vertically through the hollow region of a long vertical copper tube, then the magnetic flux linked with the copper tube (due to ‘non-uniform’ magnetic field of magnet) changes and eddy currents are generated in the body of the tube.
By Lenz’s law the eddy currents oppose the falling of the magnet which therefore experiences a retarding force .The retarding force increases with increasing velocity of the magnet and finally equals the weight of the magnet. The magnet then attains a constant final terminal velocity i.e. magnet ultimately falls with zero acceleration in the tube.

On heating the tube its resistance will increase and so the eddy currents will become feeble, resulting in an increase in the terminal velocity of the magnet.

Thomson Mass Spectrograph which is used to measure atomic masses of various isotopes in a gas :

Thomson mass spectrograph is used to measure atomic masses of various isotopes in a gas. This is done by measuring q/m of singly ionized positive ions of the gas. The positive ions are produced in the bulb at the left-hand side. These ions are accelerated towards cylindrical cathode C. 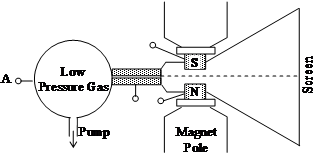 Some of the positive ions pass through the fine hole in the cathode. This fine ray of positive ions is subject to electric field E and magnetic field B and then allowed to strike a fluorescent screen or photographic plate placed just before the screen (not shown in figure). The positive ions produced near the anode are accelerated through a greater distance and thus have more kinetic energy and velocity. The different positive ions have different speeds. It can be shown that all positive ions having the same q/m, fall on the screen or photographic plate forming a parabolic trace. By changing the direction of B the other side of the parabola can be obtained.
It is found that separate isotopes forms separate parabola. Thus the number of parabolas (figure) given the number of isotopes in the gas taken in the bulb. Some ions after coming out of the cathode get neutralize and continue to move in a straight line. The impinge at the vertex of the parabola, forming a dark spot on the photographic plate.

Eliminating u, we notice that when both E and B are present, then X – Y coordinates of the deflection are related by 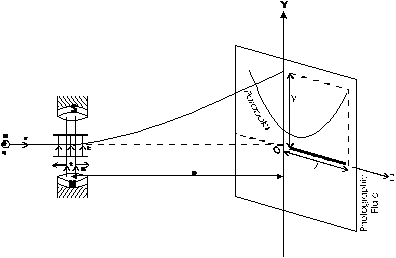 (1)   Thus all positive ions having charge to mass ratio (q/m) lie on a parabola. Higher is the velocity, lower is the value of Y and X. In principle only those positive ions for which velocity is infinite can reach the origin O.

(2)   Thus, infact, the trace does not extend upto origin O (vertex of the parabola). Since the highest velocity positive ions are those which originate near anode, the parabola’s lower end is due to high velocity ions, low velocity ions are far away from the vertex on the parabolic trace. 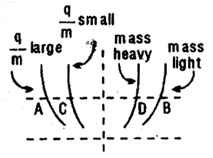 (i) The resolving power of Thomson spectrograph is poor.

(ii) The parabolas are thick (diffused) as such it is difficult to accurately measure the distances AB and CD.

(iii) Since the positive ions are spread over a parabolic trace, the intensity is weak as such isotope having a little abundance may not be able to form a detectable parabolic trace.

(iv) If the positive ions before striking the screen (photographic plate) collide with atoms of the gas in the spectrograph tube, they will diffuse the parabolic trace and may also give rise to false parabolic traces.

(v) The relative abundance of the isotopes is estimated by intensity of the parabolic traces.

(a)  Every material is composed of minute particles known as atom. Atom is indivisible i.e. it cannot be subdivided. It can neither be created nor be destroyed.

(b)  All atoms of same element are identical physically as well as chemically, whereas atoms of different elements are different in properties.

Thomson’s Atom Model :
(a)  The atom as a whole is electrically neutral because the positive charge present on the atom (sphere) is equal to the negative charge of electrons present in the sphere.

(b)  Atom is positively charged sphere of radius 10–10 m in which electron are embedded in between.

(i) The spectrum of atoms cannot be explained with the help of this model.

(ii) Scattering of α-particles cannot be explained with the help of this model.

Rutherford performed experiment of scattering of α-particles by thin gold foil and concluded:

(a)  Most of the a-particles went straight through the gold foil and produced flashes on the screen as if there were nothing inside gold foil. Thus the atom is hollow.

(b)  Few particles collided with the atoms of the foil which have scattered or deflected through considerable large angles. Few particles even turned back towards source itself.

(c)  The entire positive charge and almost whole mass of the atom is concentrated in small centre called nucleus.

(d)  The electrons could not deflected the path of a a-particles i.e. electrons are very light.

(e)  Electrons revolve round the nucleus in circular orbits.

So, Rutherford 1911, proposed a new type of model of the atom. According to this model, the positive charge of the atom, instead of being uniformly distributed throughout a sphere of atomic dimension is concentrated is a very small volume (less than 10–13 m in diameter) at its centre. The central core, now called nucleus, is surrounded by clouds of electron makes. The entire atom electrically neutral.

Bohr’s theory of hydrogen atom is based on the following assumption :

(a)  This model could not explain the fine structure of spectral lines, Zeeman effect and Stark effect.

(b)  This model is valid only for single electron systems.

(c)  This model is based on circular orbits of electrons whereas in reality the orbits are elliptical.

(d)   Electron is presumed to revolve round the nucleus only whereas in reality it also rotates about its own axis.

(e)  This model could not explain the quantization condition of angular momentum (i.e. the classical and quantum theories were used simultaneously).

(f)  This model could not explain the intensity of spectral lines.

(g)  It could not explain the doublets obtained in the spectra of some of the atoms.