(1)  When placed in a non-uniform magnetic field, it tends to move from stronger to weaker regions of the magnetic field. For example, when a diamagnetic liquid in a watch glass is placed on two pole pieces lying close to each other, we observe a depression in the middle and when the pole pieces are placed sufficiently apart, then we observe depressions at the sides .

(3)  The permeability of a diamagnetic substance is less than one.

(4)  When it is placed in a magnetic field, it develops weak magnetization in a direction opposite to the direction of the magnetizing field.

(5)  As soon as the magnetizing field is removed, it loses its magnetization.

(6)  The magnetic susceptibility does not depend upon temperature. It has a small negative value.

(1)  Removing the magnetizing field, the paramagnetics lose their magnetisation.

(2)  It develops weak magnetisation along the direction of magnetic field.

(3)  The magnetic lines of force prefer to pass through the material.

(5)  It moves from weaker to stronger parts of the magnetic field.

(6)  The magnetic permeability is slightly greater than one.

These are the substances which are strongly attracted by a magnet  and can be magnetised. Ferromagnetic substances are paramagnetic in nature lent their behaviour is much more intense. Ferromagnetism can be explained on the basis of domain theory. The cause of magnetisation for these substances is the formation of domains.

(i)   Domain is a region in which magnetic moment of all atoms is in the same direction.

(ii)  At normal temperatures these domains are distributed randomly throughout the entire material. Hence net magnetic moment of the substance is zero.

(1)  When placed in a non-uniform magnetic field, it moves from weaker to stronger parts of the magnetic field. For example, when a ferromagnetic liquid in a watch glass is placed on two closely placed pole pieces, it is observed that the liquid moves the side to the middle and when the pole pieces are moved apart, the liquid gets depressed in the middle.

(2)  The magnetic lines of force tend to pass through the material.

(4)  When it is placed in a magnetic field, it develops strong induced magnetism.

(5)  With the removal of the magnetizing field, it does not lose its magnetisation.

(6)  Its permeability is extremely large compared to that of free space. Hence B >> H. 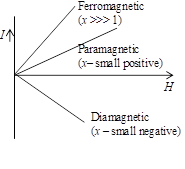