A wave is a sort of disturbance which originates from some vibrating source and travels outward as a continuous sequence of alternating crests and troughs. Every wave has five important characteristics, namely, wavelength (λ), frequency (ν), velocity (c), wave number (ν–)and amplitude (a).

Ordinary light rays, X–rays,γ–rays, etc. are called electromagnetic radiations because similar waves can be produced by moving a charged body in a magnetic field or a magnet in an electric field. These radiations have wave characteristics and do not require any medium for their propagation.

(ii) Frequency (ν): The frequency of a wave is the number of times a wave passes through a given point in a medium in one second. It is denoted by ν(nu) and is expressed in cycles per second (cps) or hertz (Hz) 1Hz = 1cps.

(iii) Velocity: The distance travelled by the wave in one second is called its velocity. It is denoted by c and is expressed in m sec–1.

(iv) Wave number (ν–) : It is defined as number of wavelengths per cm. It is denoted by and is expressed in cm–1.

(v) Amplitude: It is the height of the crest or depth of the trough of a wave and is denoted by a. It determines the intensity or brightness of the beam of light.

Consequently, a dark line will appear in the spectrum. This dark line constitutes the absorption spectrum.

If the atom loses energy, the electron passes from higher to a lower energy level, energy is released and a spectral line of specific wavelength is emitted. This line constitutes the emission spectrum.

If an electric discharge is passed through hydrogen gas taken in a discharge tube under low pressure, and the emitted radiation is analysed with the help of spectrograph, it is found to consist of a series of sharp lines in the UV, visible and IR regions. This series of lines is known as line or atomic spectrum of hydrogen.

The lines in the visible region can be directly seen on the photographic film.

Each line of the spectrum corresponds to a light of definite wavelength. The entire spectrum consists of six series of lines each series, known after their discoverer as the Balmer, Paschen, Lyman, Brackett, Pfund and Humphrey series. The wavelength of all these series can be expressed by a single formula.

and , n1 and n2 have integral values as follows 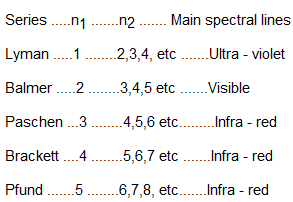 When white light from any source such as sun or bulb is analysed by passing through a prism, it splits up into seven different wide bands of colour from violet to red (like rainbow). These colour are so continuous that each of them merges into the next. Hence the spectrum is called as continuous spectrum.

When an electric discharge is passed through a gas at low pressure light is emitted. If this light is resolved by a spectroscope, It is found that some isolated coloured lines are obtained on a photographic plate separated from each other by dark spaces.
This spectrum is called line spectrum. Each line in the spectrum corresponds to a particular wavelength. Each element gives its own characteristic spectrum.