All the objects around you , the book , your pen or pencil and things of nature such as rocks, water and plant constitute the matter of the universe. Matter is any substance which occupies space and has mass.

Dalton, in 1808, proposed that matter was made up of extremely small, indivisible particles called atoms. (In Greek atom means which cannot be cut). This concept was accepted for number of years.
The main postulates of Dalton’s atomic theory are

∎ Matter is made up of small indivisible particles, called atoms.

∎ Atoms can neither be created nor destroyed. This means that a chemical reaction is just a simple rearrangement of atoms and the same number of atoms must be present before and after the reaction.

∎ Atom is the smallest particle of an element which takes part in a chemical reaction.

∎ Atoms of the same element are identical in all respects especially, size, shape and mass.

However, the researches done by various eminent scientists and the discovery of radioactivity have established beyond doubt, that atom is not the smallest indivisible particle but had a complex structure of its own and was made up of still smaller particles like electrons, protons, neutrons etc. At present about 35 different subatomic particles are known but the three particles namely electron, proton and neutron are regarded as the fundamental particles.

We shall now take up the brief study of these fundamental particles. The existence of electrons in atoms was first suggested, by J.J. Thomson, as a result of experimental work on the conduction of electricity through gases at low pressures and high voltage, which produces cathode rays consisting of negatively charged particles, named as electrons. The e/m ratio for cathode rays is fixed whose values is 1.76 x 108 C/g

We know that an atom is electrically neutral, if it contains negatively charged electrons it must also contain some positively charged particles. This was confirmed by Goldstein in his discharge tube experiment with perforated cathode.

On passing high voltage between the electrodes of a discharge tube it was found that some rays were coming from the side of the anode which passed through the holes in the cathode. These anode rays (canal rays) consisted of positively charged particles formed by ionization of gas molecules by the cathode rays.

e/m varies with the nature of gas taken in the discharge tube. The positive particles are positive residues of the gas left when the gas is ionized.

The neutral charge particle, neutron was discovered by James Chadwick by bombarding boron or beryllium with α–particles.

Characteristics of the  three fundamental particles are:

The neutron and proton have approximately equal masses of 1 amu and the electron is about 1836 times lighter, its mass can sometimes be neglected as an approximation.

The electron and proton have equal, but opposite, electric charges while the neutron is not charged.

We know the fundamental particles of the atom. Now let us see, how these particles are arranged in an atom to suggest a model of the atom.

J.J. Thomson, in 1904, proposed that there was an equal and opposite positive charge enveloping the electrons in a matrix.

This model is called the plum – pudding model after a type of Victorian dissert in which bits of plums were surrounded by matrix of pudding.

This model could not satisfactorily explain the results of scattering experiment carried out by Rutherford who worked with Thomson.

α – particles emitted by radioactive substance were shown to be dipositive Helium ions (He++) having a mass of 4 units and 2 units of positive charge.

Rutherford allowed a narrow beam of α – particles to fall on a very thin gold foil of thickness of the order of 0.0004 cm and determined the subsequent path of these particles with the help of a zinc sulphide fluorescent screen.

The zinc sulphide screen gives off a visible flash of light when struck by an α particle, as ZnS has the remarkable property of converting kinetic energy of α particle into visible light. [For this experiment, Rutherford specifically used α particles because they are relatively heavy resulting in high momentum]. 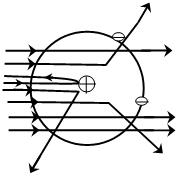 (i) Majority of the α -particles pass straight through the gold strip with little or no deflection.

(ii) Some α -particles are deflected from their path and diverge.

(iv) Some were even scattered in the opposite direction at an angle of 180°
[ Rutherford was very much surprised by it and remarked that ” It was as incredible as if you fired a 15 inch shell at a piece of tissue paper and it came back and hit you ” ].

There is far less difference between air and bullet than there is between gold atoms and α-particles assuming of course that density of a gold atom is evenly distributed.

1. The fact that most of the α – particles passed straight through the metal foil indicates the most part of the atom is empty.

3. The fact that one in 20,000 have deflected at 180° backwards indicates that volume occupied by this heavy positively charged body is very small in comparison to total volume of the atom.

On the basis of the above observation, and having realized that the rebounding α-particles had met something even more massive than themselves inside the gold atom, Rutherford proposed an atomic model as follows.

(i) All the protons (+ve charge) and the neutrons (neutral charge) i.e nearly the total mass of an atom is present in a very small region at the centre of the atom. The atom’s central core is called nucleus.

(ii) Most of the space outside the nucleus is empty.

(iv) The electrons, equal in number to the net nuclear positive charge, revolve around the nucleus with fast speed in various circular orbits.

(v) The centrifugal force arising due to the fast speed of an electron balances the coulombic force of attraction of the nucleus and the electron remains stable in its path.

Thus according to him atom consists of two parts
(a) nucleus and (b) extra nuclear part.

1. Position of electrons: The exact positions of the electrons from the nucleus are not mentioned

2. Stability of the atom: Neils Bohr pointed out that Rutherford’s atom should be highly unstable.

According to the law of electro-dynamics, the electron should therefore, continuously emit radiation and lose energy.
As a result of this a moving electron will come closer and closer to the nucleus and after passing through a spiral path, it should ultimately fall into the nucleus.

It was calculated that the electron should fall into the nucleus in less than 10-8 sec. But it is known that electrons keep moving outside the nucleus.

Before going into the details of Neils Bohr model we would like to introduce you some important atomic terms.

(a) Atomic Number (Z): The atomic number of an element is the number of protons contained in the nucleus of the atom of that element.

(b) Nucleons: Protons and neutrons are present in a nucleus. So, these fundamental particles are collectively known as nucleons.

(c) Mass Number (A): The total number of protons and neutrons i.e, the number of nucleons present in the nucleus is called the mass number of the element.

(d) Nuclide: Various species of atoms in general. A nuclide has specific value of atomic number and mass number.

IUPAC notation of an atom (nuclide)
Let X be the symbol of the element. Its atomic number be Z and mass number be A. Then the element can be represented as

(e) Isotopes: Atoms of the element with same atomic number but different mass number e.g. 1H1,1H2,1H3. There are three isotopes of hydrogen.

(i) Nuclear isomer: Nuclear isomers (isomeric nuclei) are the atoms with the same atomic number and same mass number but with different radioactive properties.