A molecule is formed if it is more stable and has lower energy than the individual atoms.
Normally only electrons in the outermost shell of an atom are involved in bond formation and in this process each atom attains a stable electronic configuration of inert gas.

Atoms may attain stable electronic configuration in three different ways by loosing electrons, by gaining or by sharing electrons. Elements may be divided into three classes.

∎ Electropositive elements, whose atoms give up one or more electrons easily, they have low ionization potentials.

∎ Electronegative elements, which can gain electrons. They have higher value of electronegativity.

∎ Elements which have little tendency to loose or gain electrons.

Three different types of bond may be formed depending on electropositive or electronegative character of atoms involved.

This type of valency involves transfer of electrons from one atom to another, whereby each atom may attain octet in their outermost shell.

The resulting ions that are formed by gain or loss of electrons are held together by electrostatic force of attraction due to opposite nature of their charges.

The reaction between potassium and chlorine to form potassium chloride is an example of this type of valency.

Here potassium has one electron excess of it’s octet and chlorine has one deficit of octet. So potassium donates it’s electron to chlorine forming a ionic bond.

Here the oxygen accepts two electrons from calcium atom. It may be noted that ionic bond is not a true bond as there is no proper overlap of orbitals.

One of the species must have electrons in excess of octet while the other should be deficit of octet. Does this mean that all substance having surplus electron and species having deficient electron would form ionic bond? The answer is obviously no.

Now you should ask why? The reasoning is that in an ionic bond one of the species is cation and the other is anion.

To form a cation from a neutral atom energy must be supplied to remove the electron and that energy is called ionisation energy.

Now it is obvious that lower the ionisation energy of the element the easier it is to remove the electron. To form the anion, an electron adds up to a neutral atom and in this process energy is released. This process is called electron affinity.

This type of valency involves sharing of electrons between the concerned atoms to attain the octet configuration with the sharing pair being contributed by both species equally.

The atoms are then held by this common pair of electrons acting as a bond, known as covalent bond. If two atoms share more than one pair then multiple bonds are formed. Some examples of covalent bonds are

When two hydrogen atoms form a bond, their atomic orbitals overlap to produce a greater density of electron cloud along the line connecting the two nuclei.

In the simplified representations of the formation of H2O and NH3 molecules, the O-H and N-H bonds are also formed in a similar manner, the bonding electron cloud having its maximum density on the lines connecting the two nuclei. Such bonds are called sigma bonds ( σ-bond).

A covalent bond established between two atoms having the maximum density of the electron cloud the line connecting the centre of the bonded atoms is called a σ-bond. A σ-bond is thus said to possess a cylindrical symmetry along the internuclear axis.

Let us now consider the combination of two nitrogen atoms. Of the three singly occupied p-orbitals in each, only one p-orbital from each nitrogen (say, the px may undergo ” head – on ” overlap to form a σ-bond. The other two p-orbitals on each can no longer enter into a direct overlap.

But each p-orbital may undergo lateral overlap with the corresponding p-orbital on the neighbour atom. Thus we have two additional overlaps, one by the two py orbitals, and the other by the two pz orbitals. These overlaps are different from the type of overlap in a σ-bond.

Bonds arising out of such orientation of the bonding electron cloud are designated as π-bonds. The bond formed by lateral overlap of two atomic orbitals having maximum overlapping on both sides of the line connecting the centres of the atoms is called a π-bond. A π-bond possess a plane of symmetry, often referred to as the nodal plane.

The different between ionic and covalent binding gives rise to difference in physical and chemical properties.

An ionic compound is composed of positive and negative ions — the ion pairs of opposite charges being held together by electrostatic attraction; the ions arrange themselves in a regular geometrical pattern in the crystal of an ionic compound.

X-ray analysis, for example, reveals that the structure of sodium chloride crystal consists of two interlocking face centred cubic lattices, one of sodium ions and the other of chloride ions — each sodium unit in the crystal is surrounded by six chlorine units, and each chlorine by six sodium units.

All truly ionic compounds, e.g., common salt, posses ionic lattice. Owing to the restrictive force in the crystal the ions are not free to move under the influence of an applied electric field.

A purely covalent compound is a non-polar substance and does not conduct an electric current.
Anhydrous hydrogen chloride is a non-conductor, but its aqueous solution conducts electricity as a result of chemical reaction which leads to the formation of ions:

They have high melting points and high boiling points. Unlike the electrovalent compounds covalent compounds exist as single molecules which have relatively little attraction to one another — the only force between them being the weak van der Waals forces; the covalent compounds are therefore either gases, liquids or solids that are easily vaporised.

Since the force of attraction between the molecules is not large, covalent compounds melt and boil at comparatively low temperature.

A covalent bond is rigid and directional (i.e., directed in space), and a covalent compound has its atoms held in definite relative positions so that the different arrangements of the atoms are not easily changed, i.e., a covalent compound may exhibit isomerism.

Butane and isobutane for example, are two distinct isomeric compounds. The ionic bond, on the other hand, is non-rigid and non-directional, i.e., the charged particles are free to arrange and pack themselves in chosen ionic lattices.

A polar liquid (with a high dielectric constant) such as water, alcohol and liquid ammonia diminishes the force of attraction between the ions of an ionic compound; it will, therefore, generally be a good solvent for ionic compounds.

But a non-polar liquid (with a low dielectric constant), e.g. organic solvents such as hydrocarbons and carbon tetrachlorde, is not good enough to overcome the inter-ionic attraction, and therefore will be a very poor solvent for ionic compounds.

A covalent bond results from the sharing of pair of electrons between two atoms where each atom contributes one electron to the bond. It is also possible to have an electron pair bond where both electrons originate from one atom and none from the other.

If is represented as ——> 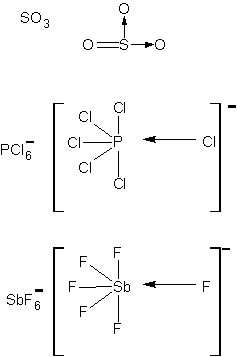 Illustration : Classify the following bonds as ionic, polar covalent or covalent and give your answer

(a) Covalent due to identical electronegativity

(b) One electron pair is shared between Si & Cl and thus, covalent bond is expected but electron negativity of Cl is greater than that of Si & some polarity develops giving polar – covalent nature

(d) Polar covalent, explanation as in (b)