The electrolysis of molten salts produces substances which are characteristic of the salt. When aqueous salt solutions are electrolysed, water may be also be involved in the electrode reaction rather than the ion derived from the solute only

The reaction involved during electrolysis of water are follows:

The following figure shows the layout of an electrolytic cell used for commercial production of Mg metal from molten MgCl2. 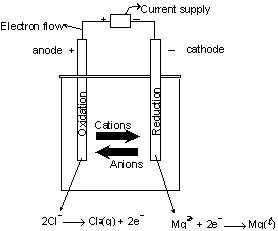 Preferential Discharge Theory: If more than one type of ion is attracted towards a particular electrode, then the ion discharged is the one which requires the least energy.