At the freezing point of pure solvent the rates at which its molecules stick together to form a solid and leave it to return to a liquid are equal.

When a solute is present fewer solvent molecules in solution are in contact with surface of the solid because solute particles get in their way. Therefore, solvent molecules adhere to the surface more slowly.
However the rate at which molecules leave the solid which is pure solvent is unchanged. Therefore even at the melting point of pure solvent there is net flow of molecules away from the solid and solid melts. Only if temperature is lowered will that flow be stopped and the equilibrium restored. 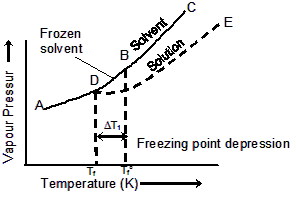 It can be seen that

that, is freezing point depression of a dilute solution is directly proportional to the number of moles of the solute dissolved in a given amount of the solvent and is independent of the nature of solute or ΔTf = Kfm

m : molality of the solution 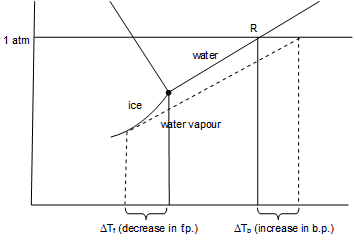