(ii) Lanthanide and actinide series containing 14 elements each are placed separately under the main periodic table. These are related to sixth and seventh periods of III group respectively.

(iv) Valency of an element in a period increases from 1 to 7 with respect to oxygen.

(v) From left to right in a period generally

b) Atomic radius, electropositive character and metallic character of an element decrease.

(vi) Diagonal relationship − Elements of second period Li, Be and B resemble closely with the elements Mg, Al and Si of third period in the next higher group.

Second Period Li Be B C

(i) Mendeleef’s periodic table contains nine groups. These are represented by Roman numerals I, II, III, IV, V, VI, VII, VIII and zero,. Groups I to VII are divided into two subgroups A and B, Group VIII consists of three sets, each one containing three elements.

(ii) Inert gases are present in zero group. These were not discovered till that time.

(iii) The valency of an element in a group is equal to the group number.

(iv) There is no resemblance in the elements of subgroups A and B of same group, except valency 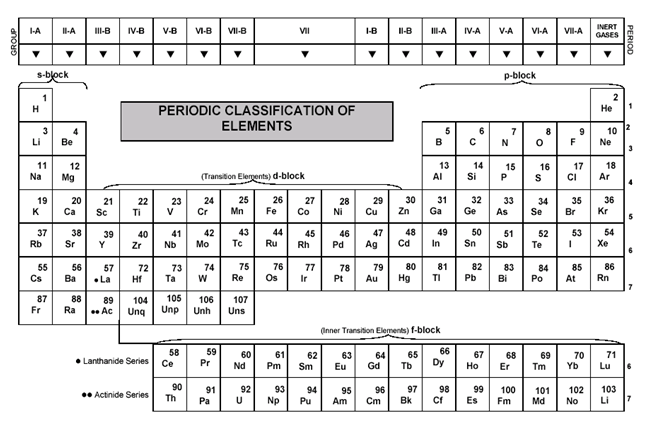 (vii) Hydrogen can be placed in both IA and VIIA groups.

(viii) In a group, from top to bottom in general

(a) Atomic weight, atomic size, electropositive character and metallic character of an element increase.
(b) Ionisation potential, electron affinity and electronegativity of an element decrease.
Uses of Mendeleef’s periodic table

(iii) Discovery of new elements − In Mendeleef’s periodic table two consecutive members differ by two or three units in the atomic weight. Where this gap was more, the gaps were left in the periodic table.

(i) Position of hydrogen is uncertain. It has been placed in IA and VIIA groups because of its resemblance with both the groups.

(ii) No separate positions were given to isotopes.

(iii) It is not clear whether the lanthanides and actinides are related to IIA or IIIB group.

(iv) Although there is no resemblance except valency of subgroups A and B, they have been put in the same group.