Periodic table helps us to undergo a systematic study of the various elements found in nature without which it would have been impossible for us to study all the elements. By classifying the elements into various groups and periods a comparative study of the elements and their compounds can be done. It also help us to analyse the periodic trend in various properties such as ionisation potential, electron affinity, electronegativity etc.

(a) Dobereiner’s Triads, 1829: Although atomic weights were not available for all elements, John Wolfgang Dobereiner in 1829 tried to classify the elements with similar properties in the groups of three elements (Triads). He could succeed in making only a few triads. In the triads of elements the atomic weight of the middle element was the arithmatic mean of the atomic weights of the other two. Some of the triads are as under.

(b) The Telluric Helix: It was in 1862, that a periodic classification of the elements was developed that approached the idea we have today. At that time A.E. de Chancourtois,a professor of Geology at the Ecole des Mines in Paris presented an account of his telluric helix in which he indicated the relative properties of elements and their atomic weights.

He used a vertical cylinder with 16 equidistant lines on its surface, the lines lying parallel to the axes. Then he drew a helix at 45 degree to the axis and arranged the elements on the spiral in the order of their increasing atomic weights. In this manner, elements that differed from each other in atomic weight by 16 or multiples of 16 fell very nearly on the same vertical line.

(c) Newland’s Octet Law, 1864: Very shortly after the discovery of telluric helix. John Alexander Reina Newland in England made the first attempt to correlate the chemical properties of the elements with their atomic weights. According to him

(i) If the elements are arranged in order of their increasing atomic weights, every eighth element had similar properties to first one like the first and eighth note in music. For example

(ii) Inert gases were not discovered till then.

(iii) All the elements could not be classified on this basis 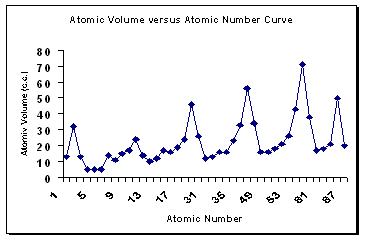 (iv) IIA group elements Be, Mg, Ca, Sr, Ba etc. occupied the positions on the ascending part of the graph

(vi) Halogens also occupied the descending part of the graph.

(e) Mendeleef’s Periodic law: In spite of the importance of the earlier contributions the major portion of the credit for the development of the periodic table must go to the Russian Chemist, Dmitrii Ivanovich Mendeleef, who proposed

(i) The physical and chemical properties of elements are periodic functions of their atomic weights.

(ii) If the elements are arranged in the order of their increasing atomic weights, after a regular interval elements with similar properties are repeated.