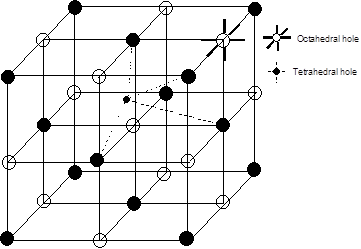 Let us first consider a fcc unit cell (as shown in the figure 8(a).). Not all the atoms of the unit cell are shown (for convenience).

Let us assume that there is an atom (different from the one that forms the fcc) at the center of an edge. 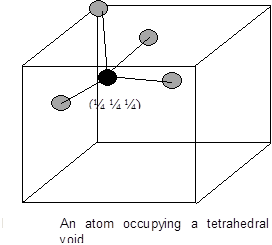 Let it be big enough to touch one of the corner atoms of the fcc. In that case, it can be easily understood that it would also touch six other atoms (as shown) at the same distance.

Such voids in an fcc unit cell in which if we place an atom it would be in contact with six spheres at equal distance (in the form of an octahedron) are called octahedral voids (as seen in fig. ) 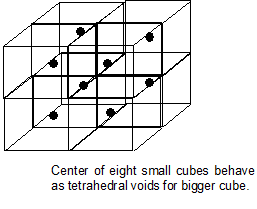 If we place an atom (different from the ones that form the fcc) at this point and if it is big enough to touch the corner atom, then it would also touch three other atoms (as shown in the fig. 8(b) which are at the face centers of all those faces which meet at that corner.

Moreover, it would touch all these atoms at the corners of a regular tetrahedron. Such voids are called tetrahedral voids (as seen in fig. )

Let us assume that eight cubes of the same size make a bigger cube as shown in the fig. 8(c). Then the centers of these eight small cubes would behave as tetrahedral voids for the bigger cube (if it were face centered).