The structure of many ionic solids can be accounted for by considering the relative sizes of the positive and negative ions, and their relative numbers.

Simple geometric calculations allow us to workout, as to how many ions of a given size can be in contact with a smaller ion.

Thus, we can predict the coordination number from the relative sizes of the ions. 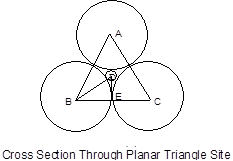 The adjacent fig. 9(a) shows the smaller positive ion of radius r+ is in contact with three larger negative ions of radii r–.

In the triangle ABD,

The angle ABC is 45° in the triangle ABD.