In any solid of the type AxBy, the ratio of the coordination number of A to that of B would be y : x.

Cl– is forming a fcc unit cell in which Na+ is in the octahedral voids. The coordination number of Na+ is 6 and therefore that of Cl– would also be 6. 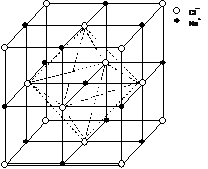 Coordination number of Zn is 4 and that of sulphide is also 4. Other substance that exists in this kind of a structure is BeO.

Other substances which exist in this kind of structure are UO2 , and ThO2 . 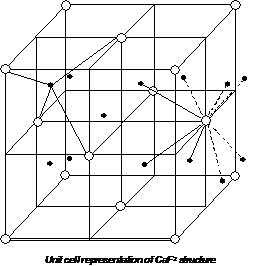 As it can be seen , this unit cell is just the reverse of Fluorite structure , in the sense that , the positions of cations and anions is interchanged.

Other substances which exist in this kind of a structure are Na2O, K2O and Rb2O. 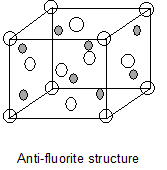 The coordination number of cesium is eight and that of chloride ions is also eight.

Other substances which exist in this kind of a structure are all halides of cesium. 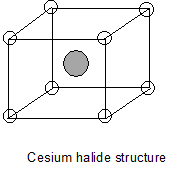 The general formula of compounds crystallizing in corundum structure is Al2O3 . The closest packing is that of anions (oxide) in hexagonal primitive lattice and two-third of the octahedral voids are filled with trivalent cations.

The general formula is ABO3 . One of the cation is bivalent and the other is tetravalent.

The bivalent ions are present in primitive cubic lattice with oxide ions on the centers of all the six square faces. The tetravalent cation is in the center of the unit cell occupying octahedral void.

Generally they can be represented as M2+M23+O4 , where M2+ is present in one-eighth of tetrahedral voids in a FCC lattice of oxide ions and M3+ ions are present in half of the octahedral voids.

Many substances of the type also have this structure.

Illustration : A solid compound AB has NaCl structure. If the radius of the cation is 95 pm. What is the radius of anion (B – ) ?

Exercise : The unit cell of silver iodide (AgI) has 4 iodine atoms in it. How many silver atoms must be there in the unit cell.