The discovery of imperfections in an other wise ideally perfect crystal is one of the most fascinating aspects of solid state science.

Stoichiometric compounds are those where the numbers of the different types of atoms or ions present are exactly in the ratios indicated by their chemical formulae.

They obey the law of constant composition that ” the same chemical compound always contains the same elements in the same composition by weight ” .

Previously these were called Daltonide compounds.

Two types of defects may be observed in stoichiometric compounds, called Schottky and Frenkel defects respectively. At absolute zero, crystals tend to have a perfectly ordered arrangement.

The defects rise if some of the lattice points in a crystal are unoccupied. The points which are unoccupied are called lattice vacancies.

The crystal, as a whole remains neutral because the number of missing positive and negative ions is the same.

Thus a Schottky defects consists of a pair of holes in the crystal lattice.

Schottky defects appear generally in highly ionic crystals in which the positive and the negative ions do not differ much in size.

These defects arise when an ion occupies an interstitial position between the lattice points.

This is shown in figure for the crystal of AgBr.

As can be seen, one of the Ag+ ions occupies a position in the interstitial space rather than its own appropriate site in the lattice.

A vacancy is thus created in the lattice as shown.

It may be noted again that the crystal remains neutral since the number of positive ions is the same as the number of negative ions.

ZnS is another crystal in which Frenkel defects appear. Zn2+ ions are entrapped in the interstitial space leaving vacancies in the lattice.

Frenkel defects appear in crystals in which the negative ions are much larger than the positive ions.

Like Schottky defects, the Frenkel defects are also responsible for the conduction of electricity in crystals and also for the phenomenon of diffusion in solids.

Such compounds do not obey the law of constant composition. There are many examples of these compounds particularly in the oxides and sulphides of the transition elements.

Thus in FeO, FeS or CuS the ratio of Fe : O , Fe : S or Cu : S differs from that indicated by the ideal chemical formula.

If the ratio of atoms is not exactly 1 : 1 in the above cases, there must be either an excess of metal ions or a deficiency of metal ions.

Electrical neutrality is maintained either by having extra electrons in the structure or changing the charge on some of the metal ions. This makes the structure irregular in some way i.e., it contains defects.

This may occur in two different ways

F-Centres: A negative ion may be absent from its lattice site leaving a hole which is occupied by an electron, thereby maintaining the electrical balance.
This type of defect is formed by crystals which would be expected to form Schottky defects.

When compounds such as NaCl , KCl , are heated with excess of their constituent metal vapours, or treated with high energy radiation, they become deficient in the negative ions and their formulae may be represented by AX1–δ, where δ is a small fraction. 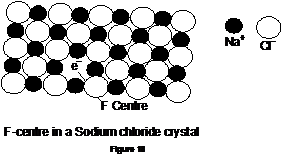 Their composition may be represented by general formula A1+δX.

This kind of metal excess defect is much more common than the first and is formed in crystals which would be expected to form Frenkel defects.
Examples include ZnO, CdO, Fe2O3 . 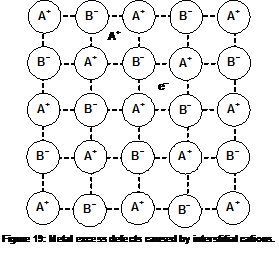 Crystals with either type of metal excess defect contain free electrons, and if these migrate they conduct an electric current.

These free electrons may be excited to higher energy levels, giving absorption spectra and in consequence their compounds are often coloured e.g. non-stoichiometric NaCl is yellow, nonstoichiometric KCl is lilac.

Metal Deficiency Defects: In certains cases, one of the positive ions is missing from its lattice site and the extra negative charge is balanced by some nearby metal ion acquiring two charges instead of one.

There is evidently, a deficiency of the metal ions although the crystal as a whole is neutral. This type of defect is generally found amongst the compounds of transition metals which can exhibit variable valency. Crystals of FeO, FeS and NiO show this type of defects . The existence of metal deficiency defects in the crystal of FeO is illustrated.