(a) Crystalline solids: In a single crystal the regularity of arrangement of the pattern extends throughout the solid and all points are completely equivalent.

(b) Amorphous solids: An amorphous solid differs from a crystalline substance in being without any shape of its own and has a completely random particle arrangements, i.e. no regular arrangement. Example: Glass, Plastic

What is a crystal ?

A crystalline solid consist of a large number of small units, called crystals, each of which possesses a definite geometric shape bounded by plane faces.

The crystals of a given substance produced under a definite set of conditions are always of the same shape. 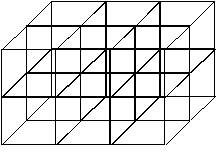 In this topic we would be studying certain properties of a solid which depend only on the constituents of the solid and the pattern of arrangement of these constituents.

It is the smallest repeating unit of the solid. Any amount of the solid can be constructed by simply putting as many unit cells as required.

Crystals are bounded by surfaces which are usually planar and referred as faces. Edge is formed by the intersection of our adjacent faces. The angle between any two faces is called an interfacial angle.

Although the size of the faces or even shapes of the crystals of one and the same substance may vary widely with conditions of formation etc., but the interfacial angles between any two corresponding faces of the crystal remain invariably the same throughout.

From external appearance we come across a variety of crystal forms in many shapes. But on the basis of length of axes and the axial angles, it has been possible to classify the various crystal forms into only seven fundamental systems. These are:

The crystals belonging to any one system may differ in shape, in size, etc., but their axial ratios as also the axial angles will always be the same. The intercepts on the three axes are denoted by a, b and c and the axial angles by α , β and γ.