(i) Adiabatic Process: When a process is carried out under such conditions that no exchange of heat takes place between the system and its surrounding, the process is called adiabatic.

Ex: The sudden bursting of a cycle tube. If the process is exothermic the heat evolved will remain in the system and, therefore, the temperature of the system rises and vice versa.

iii) Isobaric Process: If the pressure of the system remains constant during each step of the change in the state of a system, this process is said to be an isobaric process.

iv) Isochoric process: A process is defined to be isochoric if the volume of the system remains constant during the process.

Energy may be converted from one form to another, but it is impossible to create or destroy it. There are various ways of expressing the first law of thermodynamics. Some of the selected statements are given below

ii) Energy of an isolated system must remain constant, although it may be transformed from one form to another.

iii) Energy in one form, if it disappears will make its appearance in an exactly equivalent in another form.

iv) It is never possible to construct a perceptual motion machine that could produce work without consuming any energy.

Mathematical Formulation of the First Law :

Suppose a system absorbs a quantity of heat q and its state change form A to B (fig – I). This heat is used up,

i) In increasing the internal energy of the system i.e, ΔE = EB − EA 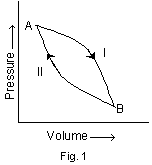 ii) To do some external work ‘ w ‘ by the system on its surroundings.

From the first law, we get.