A circle is the locus of a point which moves in such a way that its distance from a fixed point, called the centre, is always a constant . The distance r from the centre is called the radius of the circle.

Twice the radius is known as the diameter d = 2r

The perimeter C of a circle is called the circumference, and is given by

The angle a circle subtends from its centre is a full angle equal to 3600 or 2π radians.

Equation of a circle in various forms :

Equation of a circle under different conditions

Equation of a circle under different conditions:
(i) Touches both the axes with centre (a, a) and radius a

(iii)Touches y–axis only with centre (a, β) and radius |a|

Example 1. Find the centre and the radius of the circles

Solution:(i) We rewrite the given equation as

Intercepts made by a circle on the axis 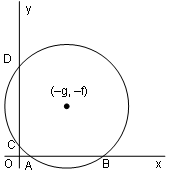 (i) Length of the intercept made by the circle