Two complex numbers are said to be equal if and only if their real parts and imaginary parts are separately equal i.e.

However, there is no order relation between complex numbers and the expressions of the type a + ib < (or >) c + id are meaningless.

A complex number z = x + iy, written as an ordered pair (x, y), can be represented by a point P whose Cartesian coordinates are (x, y) referred to axes OX and OY, usually called the real and the imaginary axes.

The plane of OX and OY is called the Argand diagram or the complex plane.

Since the origin O lies on both OX and OY, the corresponding complex number z = 0 is both purely real and purely imaginary.

Modulus and Argument of a Complex Number :

If z = x + iy , then angle θ given by tan θ= y/x is said to be the argument or amplitude of the complex number z and is denoted by arg(z) or amp(z).

The argument of the complex number 0 is not defined.

The argument of a complex number is not unique.

If θ is a argument of a complex number ,

then 2nπ + θ (n integer) is also argument of z for various values of n.

The value of θ satisfying the inequality − π < θ ≤ π is called the principal value of the argument.

In other words |z| is the length of OP i.e. the distance of point z from the origin and arg(z) is the angle which OP makes with the positive x-axis.

Trigonometric (or Polar) form of a Complex Number

This is known as Trigonometric (or Polar) form of a Complex Number.
Here we should take the principal value of θ .

For general values of the argument

(where n is an integer)

Students should note that sometimes cos θ + i sin θ is, in short, written as cis(θ).

Remark:
⋄ Method of finding the principal value of the argument of a complex number z = x + iy 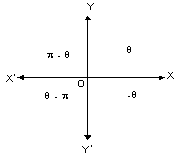 Step I: Find tan θ = |y/x| and this gives the value of θ in the first quadrant.

Step II: Find the quadrant in which z lies , with the help of sign of x and y co-ordinates.

(Since z lies in the fourth quadrant)