In this topic we would be dealing with one of the most fundamental concept in Mathematics, namely the notion of function.
Roughly speaking, term function is used to define the dependence of one physical quantity on another

Function can be easily defined with the help of the concept of mapping. Let X and Y be any two non-empty sets.
” A function from X to Y is a rule or correspondence that assigns to each element of set X , one and only one element of set Y “.

Two things should always be kept in mind:

⋄ A mapping f: X → Y Domain , Co-domain , Range Y is said to be a function if each element in the set X has it’s image in set Y.

It is possible that a few elements in the set Y are present which are not the images of any element in set X.

Let us consider some other examples to make the above mentioned concepts clear.

cube of any two distinct real numbers are distinct). Hence it would represent a function.

Distinction between a relation and a function can be easily made by drawing the graph of y = f(x). 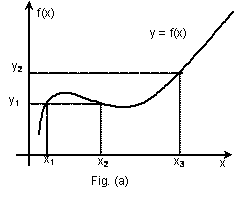 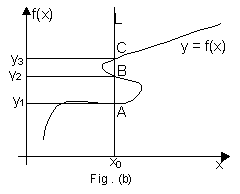 These figures show the graph of two arbitrary curves. In fig.(a) any line drawn parallel to y-axis would meet the curve at only one point. That means each element of X would have one and only one image. Thus fig (a) would represent the graph of a function.

In fig.(b) certain line (e.g. line L) would meet the curve in more than one points (A, B and C). Thus element xo of X would have three distinct images. Thus this curve will not represent a function.

Hence if y = f (x) represents a function, lines drawn parallel to y-axis through different points corresponding to points of set X should meet the curve in one and only one point.

Domain, Co-domain & Range of the function

Let f : X → Y be a function. In general sets X and Y could be any arbitrary non-empty sets. But at this level we would confine our-self only to real valued functions.

That means it would be invariably assumed that X and Y are the subsets of real numbers.

Set of images of different elements of set X is called the range of the function ‘ f ‘.

It is obvious that range could be a subset of co-domain as we may have few elements in co-domain which are not the images of any element of the set X (of course these elements of co-domain will not be included in the range).
Range is also called domain of variation.

Note that sometimes domain of the function is not explicitly defined.

Example : Find the domain of the following functions:

Hence, the given function has empty domain.

Hence domain consists of the multiples of π

How to find the Range:

There is no specific method to find the range of a given function.

In general range of a function y = f(x) can be easily obtained by expressing x as function of y, say x = g(y), then the set of values of y for which x belongs to the domain of the function is the desired range.

In many cases range can be obtained directly from the graph of the function.

Where [ ] represents the greatest integer function

Here domain is explicitly stated so we have to consider only those values of x which are non-negative.