This constant (eccentricity) is greater than unity. 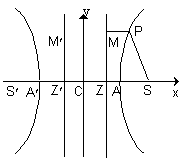 Let S be the focus and ZM the directrix of a hyperbola.

Since e > 1, we can divide SZ internally and externally in the ratio e : 1, let the points of division be A and A’ as in the figure.

Now, take C as the origin , CS as the x-axis, and the perpendicular line CY as the y axis.

Then the equation (i) becomes

∎ Since the curve is symmetrical about the y – axis, it is clear that there exists another focus S’ at (−ae, 0) and a corresponding directirx Z’M’ with the equation x= −a/e , such that the same hyperbola is described if a point moves so that its distance from S’ is e times its distance from Z’M’.

∎ The points A and A’ where the straight line joining the two foci cuts the hyperbola are called the vertices of the hyperbola.

∎ The straight line joining the vertices is called the transverse axis of the hyperbola, its length AA’ is 2a

∎ The middle point C of AA’ possesses the property that it bisects every chord of the hyperbola passing through it. It can be proved by taking P(x1 , y1) as any point on hyperbola.

∎ The straight line through the centre of a hyperbola which is perpendicular to the transverse axis does not meet the hyperbola in real points. If B and B’ be the points on this line such that BC = CB’ = b , the line BB’ is called the conjugate axis.

∎ The latus rectum is the chord through a focus at right angle to the transverse axis.

The difference of the focal distances of a point on the hyperbola is constant. PM and PM’ are perpendiculars to the directrices MZ and M’Z’

∎ Using this property hyperbola can be defined in another way − Locus of a moving point such that difference of its distances from two fixed point is constant, would be hyperbola.

Relative Position of a Point with respect to the Hyperbola:

Note that this relation is converse in hyperbola if we compare with that in circle, parabola or ellipse.

Thus any point on the curve , in parametric form is x = a secθ, y = b tanθ

Since the fundamental equation of the hyperbola only differs from that of the ellipse in having −b2 instead of b2 , it will be found that many propositions for the hyperbola are derived from those for the ellipse by changing the sign of b2 .

If m = ±b/a the tangents touch at infinity and are called as asymptotes.

(vii) Through a given point, four normals can be drawn to a hyperbola (real or imaginary).

(ix) Equation of director the circle is x2 + y2 = a2 – b2 .
That means if a2 > b2, there would exist several points such that tangents drawn from them would be mutually perpendicular.

For a2 = b2 , centre is the only point from which two perpendicular tangents (asymptotes) to the hyperbola can be drawn.