Coordinate Geometry is the unification of algebra and geometry in which algebra is used in the study of geometrical relations and geometrical figures are represented by means of equations.
The most popular coordinate system is the rectangular cartesian system.

Coordinates of a point are the real variables associated in an order to describe its location in space.

Here we consider the space to be two-dimensional.

Through a point O, referred to as the origin, we take two mutually perpendicular lines XOX’ and YOY’ and call them x and y axes respectively.

The position of a point is completely determined with reference to these axes by means of an ordered pair of real numbers (x, y) called the coordinates of P where |x| and |y| are the distances of the point P from the y-axis and the x – axis respectively.

Let A and B be two given points, whose coordinates are given by A(x1, y1) and B(x2, y2) respectively.

Coordinates of the point P dividing the join of two points A(x1, y1) and B(x2, y2) internally in the given ratio λ1 : λ2 are

In both the cases,λ1/λ2 is positive.

Notes:
⋄ If the ratio, in which a given line segment is divided, is to be determined, then sometimes, for convenience (instead of taking the ratio λ1 : λ2), we take the ratio k : 1. If the value of k turns out to be positive, it is an internal division otherwise it is an external division.

⋄ Incentre : The point of concurrency of the internal bisectors of the angles of a triangle is called the incentre of the triangle. The coordinates of the incentre are given by

where a, b and c are length of the sides BC, CA and AB respectively

⋄ Circumcentre : The point of concurrency of the perpendicular bisectors of the sides of a triangle is called circumcentre of the triangle. 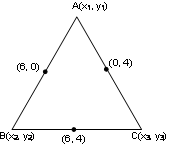 Hence ΔABC is right angled triangle.
∠A = π/2
Circumcentre is midpoint of hypotenuse which is (6, 4) itself and centroid

where a, b, and c are the sides opposite to the angles A, B and C respectively.

By geometry, we know that

If the lengths of the sides AB, BC and AC are c, a and b respectively, then

Coordinates of D are