We refer to the base as the adjacent side and to the altitude as the opposite side. There are six trigonometric ratios, also called trigonometric functions or circular functions. With reference to angle A, the six ratios are:

is called sine of A , and written as sinA

is called the cosine of A , and written as cosA

is called the tangent of A , and written as tanA
Obviously,

.
The reciprocals of sine, cosine and tangent are called the cosecant, secant and cotangent of A respectively. We write these as cosec A, sec A, cot A respectively.

i.e. all trigonometrical functions have been expressed in terms of cotθ. This is left as an exercise for you to derive these results.

Just as a hint for you, express the denominator of fraction that defines cotθ as unity (i.e. base as unity) and form a right-angled triangle to express the sides and proceed. 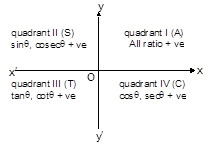