Mathematically, a scalar is just a real number.

Examples of scalars are distance, energy, voltage, permeability, etc. Finite angular rotations of a body about a point possess both magnitude and direction but they are not vectors since they cannot be represented by a directed straight line segment. Infinitesimal rotations can be treated as vectors.

Representation of a vector:

Pictorially, we represent a vector by a line segment having a direction. The length of the line segment is a measure of the magnitude of the vector (with/without some suitable scale) and the direction is indicated by putting an arrow anywhere on that line segment.
We write it as $\vec{AB}$ or $\vec{a}$ , and read as vector AB or a. A is called the initial point and B the terminal point (or terminus) of the vector. Line AB produced on both sides is called the line of support. 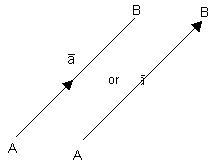 Two vectors are said to be equal if they have (i) the same length, (ii) the same or parallel supports and (iii) the same sense.

Note:
In this chapter we will deal with only those vectors which can be moved anywhere in space protecting their magnitude and direction (called free vectors as against those which are fixed in space) i.e., the vector will be assumed unchanged if it is transferred parallel to its direction anywhere in space.

Consequently two vectors are said to be equal if they have the same magnitude and direction.

Position vector of a point:

We take arbitrarily any point O in space to be called the origin of reference. The position vector (p.v.) of any point P, with respect to the origin is the vector $\vec{OP}$ . For any two points P and Q in space, the equality $ \vec{PQ} = \vec{OQ} -\vec{OP} $ expresses any vector $\vec{PQ}$ in terms of the position vectors $\vec{OP}$ and $\vec{OQ}$ of P and Q respectively.

It is defined as the smaller angle formed when the initial points or the terminal points of two vectors are brought together.
Note: 0° ≤ θ ≤ 180° 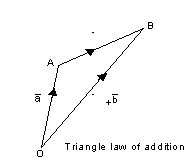 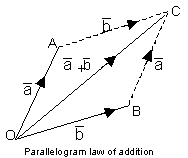 Note that addition is commutative

i.e. the addition of vectors obeys the associative law.

A consequence of this is that, if the terminus of the last vector coincides with the initial point of the first vector, the sum of the vectors is $ \displaystyle \vec{0} $ 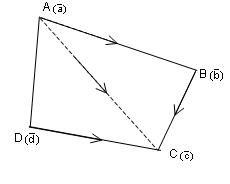 From the triangular law of addition

addition of these two equation gives,

Exercise :
(i) If the mid-points of consecutive sides of a quadrilateral are connected by straight lines prove that the resulting quadrilateral is a parallelogram.

(ii) ABCD is a quadrilateral and G the point of intersection of the lines joining the middle points of opposite sides. If O is any point, prove that