Q: 1. State, for each of the following physical quantities, if it is a scalar or a vector. Volume, mass, speed, acceleration, density, number of moles, velocity, angular frequency, displacement, angular velocity.

Sol:
Work and current are the scalar quantities in the given list.

Sol:
Since, Impulse = change in momentum = force × time. As momentum and force are vector quantities, hence impulse is a vector quality.

Q:4. State with reasons, whether the following algebraic operations with scalars and vectors are meaningful.

Q: 5. Read each statement below carefully and state with reasons, if it is true or false:

(a) The magnitude of a vector is always a scalar

(b) Each component of a vector is always a scalar

(c) The total path length is always equal to the magnitude of the displacement vector of a particle.

(d) The average speed of a particle (defined as total path divided by the time taken to cover the path) is either greater or equal to the magnitude of average velocity of the particle over the same interval of time.

(e) Three vectors not lying in plane can never add up to given a null vector.

Sol:
(a) True, because magnitude is pure number

(b) False, because each component is a vector.

(c) True only, if the particle moves along a straight line in the same direction, otherwise false.

(d) True, because the total path length is either greater than or equal to the magnitude of the displacement vector.

(e) True, as they cannot represent the three sides of a triangle taken in the same order. 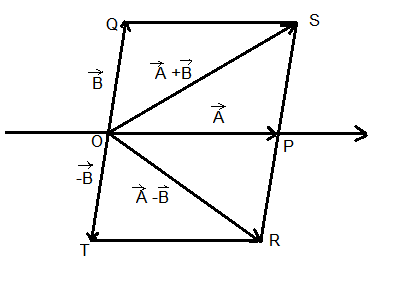 We know that the length of one side of triangle is always less than the sum of the lengths of the other two sides.
Hence from OPS, we have
OS < OP + PS or, OS < OP + OQ

If the two vectors A→ and B→ are acting along the same straight line and in the same direction then,

The modulus of ((OS)→-(PS)→) has been taken because the LHS is always positive but the RHS may be negative if OP < PS.
Thus from (3) we have,

If the two vectors are acting along the straight line but in opposite direction, then,

In fig, from OPS we have,

The modulus of ((OP) ⃗-(OT) ⃗) has been taken because LHS is positive and RHS may be negative if
OP < OT.

If the two vectors A→ and B→ are along the same straight line in the same direction then.