Question: 1 . In which of the following examples of motion can the body be considered approximately a point object

(a) a railway carriage moving without jerks between two stations .

(b) a monkey sitting on the top of a man cycling smoothly on a circular track.

(d) a thumbing beaker that has slipped off the edge of a table ?

Solution:
(a) The carriage can be consider a point object if the distance between the two stations is very large compared to the size of railway carriage.

(c) The cricket ball can not be considered as a point object because the size of the spinning cricket ball is quite appreciable as compared to the distance through which the ball may turn on hitting the ground.

(d) A beaker slipping off the edge of the can not be considered as a point object because the size of the beaker is not negligible as compared to the height of the table. 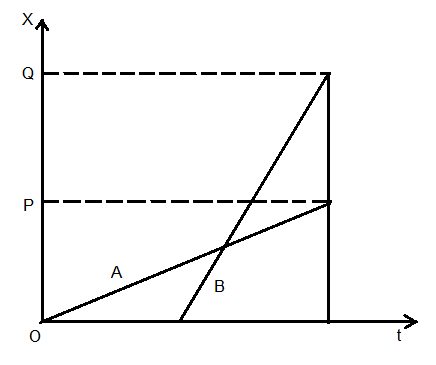 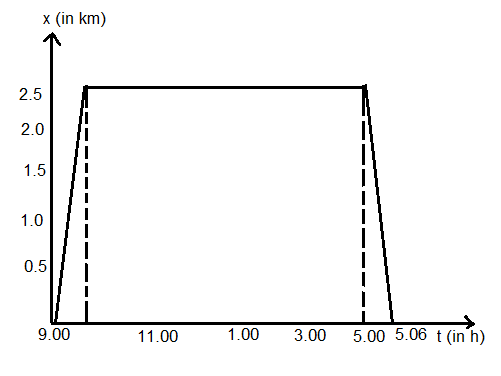 Question.5. A jet airplane travelling at the speed of 500 km/h ejects its products of combustion at the speed of 1500 km/h relative to the jet plane. What is the speed of the latter with respect to observer on the ground ?

Solution. Let, vP = velocity of the product w.r.t. ground consider the direction of motion of airplane to be positive direction of x –axis.

Relative speed of products of combustion w.r.t. air plane is,

Here –ve sign shows that the direction of products of combustion is opposite to that of the airplane. Thus the magnitude of relative velocity is 1000 kmh-1

Question: 6. A car moving along a straight highway with speed 126 km/h is brought to a brought to a stop with a distance of 200 m. what is the retardation of the car (assumed uniform) and how long does it take for the car to stop ?

Question:7. Two trains A and B of length 400 m each are moving on two parallel tracks with a uniform speed of 72 kmh-1 in the same direction, with A ahead of B. The driver of B decides to overtake A and acceleration by 1 ms-2. If, after 50 s, the guard of B just crosses past the driver of A, what was the original distance between them (the guard of B and the driver of A)?

Solution:   Originally, both the trains have the same velocities. So the relative velocity of B w.r.t. A is zero.

Question: 8. On a two lane road, car A is travelling with a speed of 36 kmh-1. Two cars B and C approach car A in opposite directions with a speed of 54 kmh-1 At a certain instant, when the distance AB is equal to AC, both being 1 km, B decides to overtake A before C does. What minimum acceleration of car B is required to avoid an accident?

Solution. Let, v Kmh-1 = constant speed with which the buses ply between the towns A and B.

The distance travelled by the bus in time T (minutes) = vT

Putting this value of v in (i) we get,

(a) What is the direction of acceleration during the upward motion of the ball ?

(b) What are the velocity and acceleration of the ball at the highest point of its motion.

(c) Choose the x = 0, t = 0 be the location and time at its highest point, vertically downwards direction to be the positive direction x axis and given the signs of position, velocity and acceleration of the ball during its upwards, and downwards motion.

(d) To what height does the ball rise and after how long does the ball return to the player’s hands. (g = 9.8 ms-2 and air resistance is negligible).

(a) Since the ball is moving under the effect of gravity, the direction of acceleration due to gravity to the acceleration vertically downward.

(b) At the highest point, the vertical velocity of the ball becomes zero and acceleration is equal to the acceleration due to gravity = 9.8 ms-2 in vertically downwards direction.

(d)Let, t = time taken by the ball to reach the highest point where height from the ground is S.

Taking the vertical motion of the ball we have,

When an object moves under the effect of gravity alone the time of ascent is always equal to the time of decent. Therefore, total time after which the ball returns to the player’s hand = 3 + 3 = 6s.