Q: 1. The sign of work done by a force on a body is important to understand. State carefully if the following quantities are positive of negative:

(a) Work done by a man in lifting a bucket out of a well by means of a rope tied to the bucket.

(b) Work done by gravitational force in the above case.

(c) Work done by friction on a body sliding down an inclined place.

(d) Work done by an applied force on a body moving on a rough horizontal plane with uniform velocity.

(e) Work done by the resistive force of air on a vibrating pendulum in bringing it to rest.

(a) It is positive, as force and displacement in same direction.

(b) It is negative, as the bucket is moving against the direction of gravitational force.

(c) It is also negative, as the friction is always opposite to the direction of motion.

(d) It is positive as the force and displacement are in same direction.

(e) It is negative as the resistive force acts against the direction of motion.

Q: 2. A body of mass 2 kg initially at rest moves under the action of an applied horizontal force of 7N on a table with coefficient of kinetic friction = 0.1. Calculate the

(iv) Change in K.E. of the body in 10s and interpret your result.

This shows that the change in K.E. is equal to the work done by the net force.

Q:4. The potential energy function for a particle executing simple harmonic simple harmonic motion is given by U(x) = (1/2)kx2 , where K is force constant of the oscillator. For K = 0.5 N/M the graph of versus x is shown in the figure. Show that a particle of total energy 1 joule moving under this potential must turn back, when it reaches x = ± 2m.

Sol. At any instant, the total energy of an oscillator is equal to the sum of K.E. and P.E. 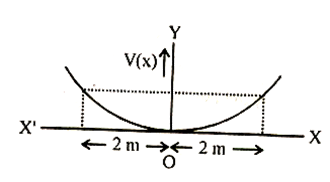 Q: 9. A body is initially at rest. It undergoes one dimensional motion with constant acceleration. The power delivered to it at time t is proportional to

Q:10. A body is moving unidirectionally under the influence of a source of constant power. Its displacement in time t is proportional to

Displacement is proportional to t3/2