Matter consists of small particles called molecules which again consist of atoms. Until the end of the 19th century, it was believed that atoms were indivisible, but later, it was found that atoms are consisted of smaller subatomic particles-electrons, protons and neutrons. 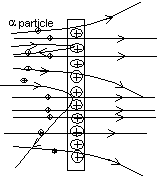 They observed that
(i) Most of the α-particles passed undeviated.

(iii) An extremely small number of very few α-particles deviated through large angles, and about one in a million α-particles retraced their path.

The Thomson model had predicted a small deviation of a few degrees as the positive and negative charges are distributed throughout the whole atom in this model. The experimental results were very different.

Rutherford later wrote : “It was quite the most incredible event that ever happened to me in my life. It was almost as incredible as if you had fired a 15 – inch shell at a piece of tissue paper and it came back and hit you.”

At the center of an atom is a positively charged nucleus.
(iii) As a very small number of α -particles got deviated through large angles & retraced their path, the size of the nucleus must be very small compared to that of an “atom”. The nucleus must also be very heavy.

Center of an atom is a massive nucleus.
Based on all these conclusions, Rutherford presented a model of the atom:

(a) Electrons (negatively charged light particles) revolve around a fixed positively charged central nucleus in different orbits, just like the planets revolve around the sun. The electrostatic attraction (Coulombic force) between an electron and nucleus provides the necessary centripetal acceleration.

(b) The orbits of revolution of the electrons are circular

When a charged particle accelerates, it emits electromagnetic radiation. If this principle were to hold good, an electron moving in a circular path would lose energy continuously. 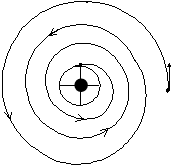 Therefore, an electron cannot move in a stable circular orbit. It would continuously lose energy, and collapse into the nucleus. Atoms would be unstable. This limitation was analysed carefully by Neils Bohr, a physicist working in Rutherford ‘ s laboratory.