When particle moves in a circular path describing an angle θ during time t as shown in the Figure from the position 1 to the position 2, we see that the magnitude of the position vector

(that is equal to the radius of the circle) remains constant

of the particle from position 1 to the position 2 is given by referring the Figure : 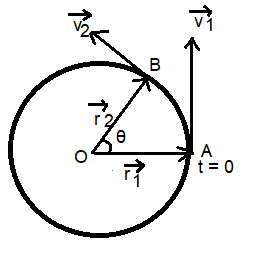 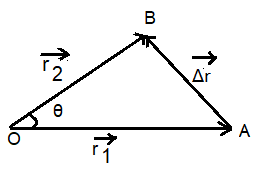 The distanced covered by the particle during the time t is given as
d = length of the arc AB
⇒ d = r θ
Therefore, the ratio of distance to the magnitude of displacement for any angular distance is given as

Since r θ = length of the Arc AB

Eliminating t from the previous equation we obtain

We want to know the magnitude and direction of the change in the velocity of the particle as it moves from A (position 1) to B (position 2) during time t as shown in Figure. 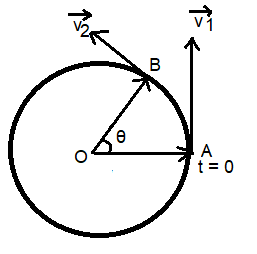 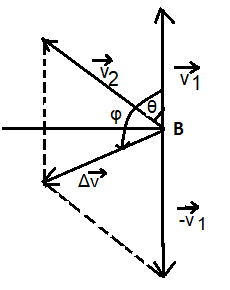 The change in velocity vector is given as

gives the magnitude of

and the direction of

is shown in Figure that can be given as

If θ tends to zero, φ → 90°, that means, the direction of change of velocity vector becomes perpendicular to the instantaneous tangential velocity vector

In the other words, we can say that, at any instant the change of velocity vector

That means the acceleration vector

Illustration : Find the magnitude of average acceleration of the tip of the second hand during 10 seconds.

Solution: Average acceleration has the magnitude

Exercise : An astronaut is rotating in a rotor of radius 4 m . If he can withstand upto acceleration of 10 g, then what is the maximum number of permissible revolutions ? (g = 10 m/s2)