The audio frequency signals (20 Hz to 20 kHz) cannot be transmitted as such over long distances. This is primarily because :

(ii) for efficient radiation and reception, the transmitting and receiving antennas should have heights comparable to a quarter wavelength of the frequency used. For 15 kHz frequency, the height of the antennas has to be about 5000 metre, which size is unthinkable.

(iii) audio frequency range being so small , there would be so much of overlapping and confusion.
To overcome these difficulties, we superimpose the audio frequency signals (called the modulating signal) on a high frequency sine wave, called the carrier wave. This process is called modulation. The resultant modulated wave is then transmitted.

In the process of modulation, some characteristic of high frequency sine wave (called the carrier wave) is varied in accordance with the instantaneous value of the modulating signal (i.e. the audio frequency signal).

Mathematically, we represent a Carrier wave by the equation :

where E is maximum voltage, e is the instantaneous voltage at time t; ω is angular frequency and φ is the phase w.r.t. some reference.
Any of the three characteristics/parameters (E , ω , φ) of the carrier wave may be varied by the modulating signal giving rise to the respective amplitude modulation; frequency modulation and phase modulation.

Thus in amplitude modulation , max. amplitude Vc of unmodulated carrier is made proportional to the instantaneous modulating voltage Vmsinωmt .

Figure shows an amplitude modulated wave for one cycle of the modulating sine wave. The max. positive amplitude of AM wave is given by

It is called top envelope 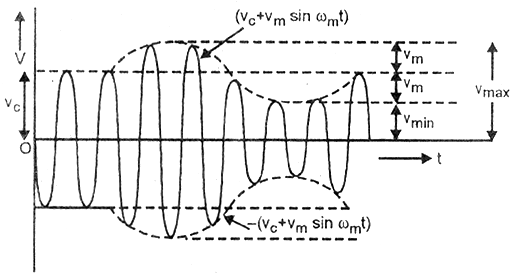 The maximum negative amplitude of AM was given by

This is called bottom envelope.

The modulated wave extends between these two limiting envelopes, and its frequency is equal to the unmodulated carrier frequency.

Depth or index of modulation (m)

The modulation index (m) is a number lying between 0 and 1 . Often , m is expressed in percentage and is called the percentage modulation.

Frequency modulation (FM) is defined as a system , in which the frequency of carrier wave is varied in accordance with the instantaneous value of the modulating voltage. However, the amplitude of the carrier wave is kept constant.

The general equation of an unmodulated carrier wave may be written as :

where, x = instantaneous value of voltage or current at any time t,

A = maximum voltage/current , called the amplitude,

When frequency of the carrier is made to vary in accordance with another signal (normally of a lower frequency) we obtain frequency modulated waves.

Following are some of the advantages of frequency modulation :

(i) The amplitude of FM wave is constant, whatever be the modulation index. Therefore, transmitted power is constant, unlike in the AM wave.

The amplifiers used in FM transmitters handle constant power and therefore, they are more efficient. Further, all the power transmitted in FM is useful, whereas in AM, most of the power is in the transmitted carrier.

(ii) In FM wave, amplitude variations may be caused by noise. By using amplitude limiters in the FM receivers, we can almost eliminate noise.

(iii) The noise can be reduced still further by increasing the ‘deviation’, in FM wave. This feature is not available in the AM wave, as depth of amplitude modulation cannot be increased beyond 100% without causing distortion.

(v) FM broadcasts operate in VHF and UHF frequency ranges – where the noise is much less than in MF and HF ranges for AM broadcasts.

(vi) With the use of space wave in FM broadcasts, radius of operation is limited to slightly more than the line of sight. This reduces the chances of cochannel interference.

Some of the disadvantages of FM are :

(i) The channel width required by FM is upto 10 times as large as that needed by AM.

(ii) The equipment used in transmission and reception of FM is more complex.

(iii) The area of reception for FM is much smaller than for AM, as reception in FM is limited to the line of sight. This limits the FM mobile communications over a wide area.

Demodulation is the reverse process of modulation which is performed in a receiver to recover the original modulating signals.

We know that a signal to be transmitted is impressed on to a carrier wave using any of the modulation methods described above. It is then suitably treated, amplified and applied to a transmitting antenna – which radiates or propagates the same.

At the receiving end, the signal is generally quite weak having powers in picowatt. Therefore, the receiver must amplify the received signal first. As the signal is usually accompanied by lots of other (unwanted) signals, the desired signal is selected and others are rejected by the receiver. Finally, demodulation is performed in the receiver to recover the original modulating signals.

Thus a receiver has the following functions :

(i) Selecting the desired signal and rejecting the unwanted signals

(iii) Displaying the demodulated signal in a desired manner