To maintain a steady current in a conductor, a constant potential difference must be maintained across its ends. Cells or batteries are used to accomplish this task.

If one or more conductors are connected in such a manner that it offers one or more closed paths for current to flow, the arrangement is referred to as an electric circuit.

The analysis of such circuits is accomplished with the help of two laws known as Kirchoff’s laws :

In other words algebraic sum of all the currents meeting at a junction is zero.

The word algebraic here means that we have to take into account the current direction in the summation, i.e.

if the currents reaching the junction are taken as positive, the current leaving it is to be taken as negative.

For the shown diagram, KCL gives us

KCL is a direct consequence of the principle of conservation of electric charge.

In order to get the correct value of potential drop for different type of elements, you may consider following facts.

(i) In a resistor current flows from high potential to low potential end.
Hence for the resistor shown below.

VA − VB = q/C where C is its capacitance and

Problem: Determine the current in each branch of the following network : Fig. 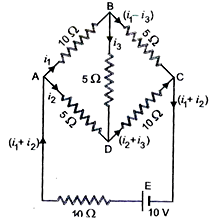 Solution. The current through the various arms of the circuit have been shown in Fig

According to Kirchhoff’s second law; In a closed circuit ABCEA ;

In a closed circuit ABDA ;

In a closed circuit BCDB ;

Solution : Suppose that a current i flows through the external resistance (8 Ω) and it divides into two branches at the node B as i1 and i2

The negative sign for i2 means that its direction is opposite to the direction that we had assumed.

Problem : Calculate the value of current I in the section of networks shown in figure

Solution :This type of problem checks your understanding of KCL

Example : A part of a circuit in steady state along with current flowing in the branches with value of each resistance is shown in figure. Calculate the energy stored in the capacitor C0. 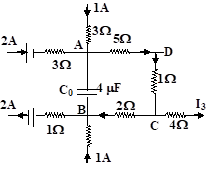 Solution : Find out potential difference across the capacitor first.

Applying Kirchoff’s junction law at A and B

So energy stored in the capacitor

Problem: An electrical circuit is shown in figure. Calculate the potential difference across the resistor of 400 Ω, as will be measured by the voltmeter V of resistance 400Ω by applying Kirchhoff’s rule . 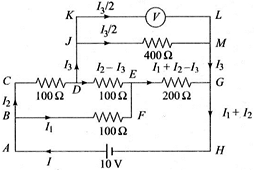 Applying Kirchhoff’s law in CDEFBC , we get

Applying Kirchhoff’s law in ABFEGHA, we get

Therefore, potential difference across JM is