A potentiometer is used to compare electromotive forces of two cells or to measure the internal resistance of a cell.

Principle of Potentiometer : The potentiometer is based upon the principle that when a constant current is passed through a wire of uniform cross sectional area, the potential drop across any portion of the wire is directly proportional to its length.

Consider the network shown in the diagram : Here ,

Now, let us consider that an EMF source having EMF same as (VA − VB) calculated above and internal resistance ‘ r ‘ connected in parallel to R1

Suppose that a current ‘ I2 ‘ passes through the EMF source 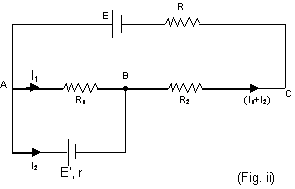 We have, applying Kirchoff’s rules, the following equations

For chosen value of E’ that is

Thus, taking a length of uniform resistance wire between A and C instead of the two resistors R1 & R2, it is possible to get zero (null) deflection in the galvanometer in the circuit shown below, provided that. 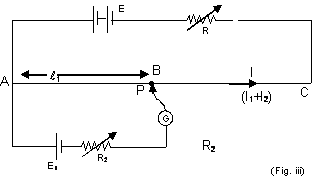 Let l1 be the length AB of the wire, corresponding to zero deflection in galvanometer, and let B be the point where the movable pointer ‘ P ‘ (also called Jockey) makes contact with wire AC.

If the same experiment is repeated but with another cell of EMF E2 , we will be getting a different length ‘ l2 ‘ at the instant galvanometer shows null deflection. If in both the cases the rheostat ‘ R ‘ is kept unchanged,

The arrangement shown in figure (iii) is called Potentiometer and we use it to measure EMF using the above relationship.

Compare of EMF of two cells: 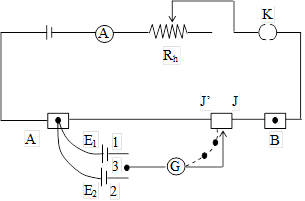 Let the null points are obtained at lengths l1 and l2 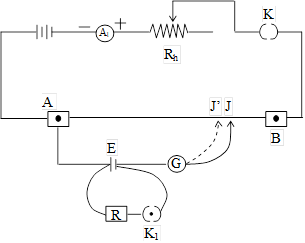 When we want to measure the internal resistance of a cell, consider the following formula :

Example: Figure shows a Potentiometer with a cell of 2.0 V and internal resistance 0.4 Ω maintaining a potential drop across the resistor emf of 1.02 V ( for very moderate currents up to a few amperes) gives a balance point at 67.3 cm. Length of the standard cell, a very high resistance of 600 k Ω is put in series with it, which is shorted close to the balance point. The standard cell is then replaced by a cell of unknown e.m.f E and the balance point found similarly turns out to be at 82.3 cm length of the wire.

(c) Is the balance point affected by the high resistance ?

(d) Is the balance point affected by the internal resistance of the driver cell ?

(e) Would the method work in the absolute situation, if the driver cell of the Potentiometer had an emf of 1.0 V instead of 2.0 V ?

(f) Would the circuit work for determining extremely small emf, say of the order of a few mV (such as the typical emf of a thermocouple) ? If not, how will you modify the circuit ? 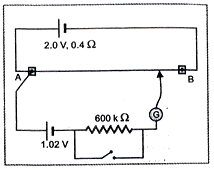 The purpose of using high resistance of 600 k Ω is to allow very small current through the galvanometer when the movable contact is far from the balance point.

No, the balance point is not affected by the presence of this resistance.

No, the balance point is not affected by the internal resistance of the driver cell.

The circuit will not work for measuring extremely small e.m.f because in that case, the balance point will be just close to the end A. To modify the circuit, we have to use a suitable high resistance in series with the cell of 2.0 V. This would decrease the current in the potentiometer wire. Therefore, potential difference/cm of wire will decrease. Then only extremely small e.m.f can be measured.

Example: Figure shows a potentiometer circuit for comparison of two resistances. The balance point with a standard resistor R = 10.0 Ω is found to be 58.3 cm, while that with the unknown resistance X is 68.5 cm. Determine the value of X. What might you do if you failed to find a balance point with given cell of e.m.f. E ? 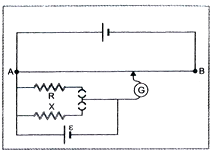 Let I be the current in the potentiometer wire and E1 and E2 be the potential drops across R and X respectively. When connected in circuit by closing respective key. Then 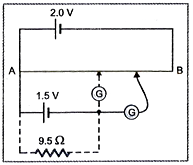