Hooke’s law states that the extension produced in the wire is directly proportional to the load applied within elastic limit.

Later on it was found that this law is applicable to all types of deformations such as compression, bending, twisting etc. and thus a modified form of Hooke’s law was given as stated below.

Within elastic limit, the stress developed is directly proportional to the strain produced in a body

where E is constant and known as modulus of elasticity.

According to Hooke’s law, within elastic limit,

It depends upon the nature of material of the body and the manner in which the body is deformed.

Thus modulus of elasticity is the ratio of the stress to the corresponding strain produced, which is a constant, within the elastic limit.

Types of moduli of elasticity

Corresponding to three types of strain, there are three elastic moduli, described below :

(a) Young’s Modulus of elasticity (Y)

It is the ratio of normal stress to the longitudinal strain within the elastic limit. Thus

Consider a metal wire AB of length l, radius r and of uniform area of cross-section a. Let it be suspended from a rigid support at A, as shown in the figure below. 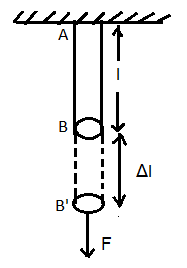 (b) Bulk Modulus of elasticity (k)

It is the ratio of normal stress to the volumetric strain, within the elastic limit. Thus

Consider a spherical solid body of volume V and surface area a. In order to compress the body, let a pressure p be applied on the body and suppose that its volume decreases by ΔV as shown in figure. 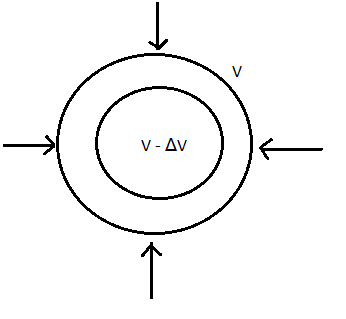 Here negative sign shows that volume is decreasing when pressure is applied.

It is the ratio of tangential stress to the shearing strain, within the elastic limit. It is also called shear modulus of rigidity.Thus 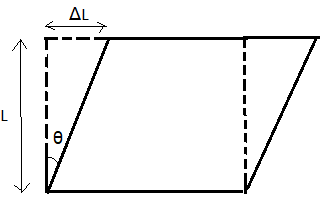 It is the ratio of lateral contraction strain to the longitudinal elongation strain .

Where -Δr = decrease in radius of the wire , r= original radius

ΔL = increase in length of the wire , L = original length