The existence of three states of matter i.e. solid, liquid and gas can be explained on the basis of interatomic and intermolecular forces.

These states differ from each other due to the following two factors:

1. The magnitudes of the interatomic and intermolecular forces.

2. The extent of random thermal motion of the atoms and molecules of a substance (which depends upon temperature.)

Elasticity: The property of the body to regain its original configuration (length, volume or shape) when the deforming forces are removed is called elasticity.

(a) Deforming Force : If a force applied on a body causes a change in the shape or size of the body (either in length, volume or shape,) then this force is deforming force. 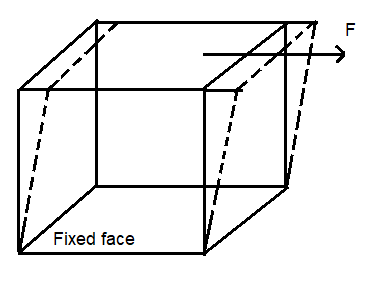 When a deforming force is applied to a body, it changes the shape or size of the body by changing the normal positions of the molecules or atoms of the body.

Normal Stress : When force acting normal to the surface then Stress setup in the body is called Normal Stress .

Volumetric Stress : When normal stress changes the volume of the body then it is called volumetric stress (or) bulk stress. 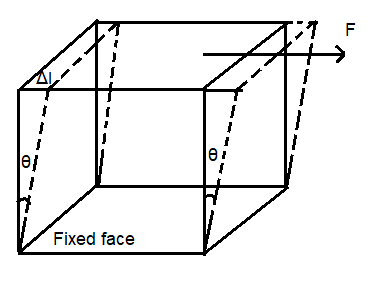 When a deforming force is applied on a body, there is a change in the shape or size of the body. The body is said to be strained or deformed. The ratio of change in dimension to the original dimension is called strain.

i.e. Strain being the ratio of two like quantities has no units and dimensions.