A cylinder of radius R and length l  is placed in uniform electric field E such that its axis is perpendicular to E.

This law is true for any closed surface, but is useful only in case of symmetry, because in other cases the integral on the left hand side becomes very difficult to evaluate .

(A) Electric field due to a uniformly charged spherical shell: 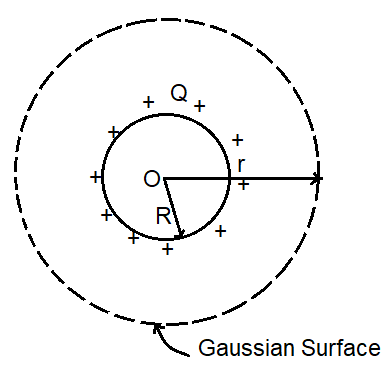 From symmetry the electric field at any point on the Gaussian surface is same and is directed radially outward So ,

Thus, electric field inside the shell is zero and outside it is similar to that of a point charge. The same result is true for a charged solid conducting sphere because the charge given to a conductor resides on its outer surface.

Similarly for a uniformly charged solid dielectric sphere carrying a charge Q and having radius R it can be shown that :

(B) For an infinite line charge using a cylindrical Gaussian surface, it can be shown that

which is directed perpendicular to the plane sheet.

Note: that this value is independent of the distance of the point from the sheet. Thus it is a uniform electric field.