Due to abundance of free electrons, conductors have following properties.

(i) Any charge given to a conductor resides on its surface.

(ii) As a result of (i) from Gauss’s law the Electric field at any point inside a conductor is zero.

(iii) Potential gradient (= |E->|)will also be zero. Thus the potential inside a conductor and on its surface has a constant value.

(iv) Electric lines of force are absent inside a conductor as electric field is zero here. Out side the conductor these lines are normal to the surface of conductor as the charged conducting surface is equipotential.

Note: These properties are valid only under electrostatic conditions (The charges are stationary).

Application of Gauss’s Law and Zero electric field inside conductor can be understood with the following example:

Let us have two large conducting plates A and B kept parallel to each other.

qA and qB are the charges given to plates (Let qA > qB). 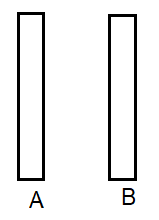 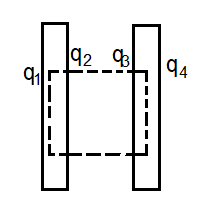 And suppose you are interested in finding the charge distribution i.e. charges on the four faces.

(i) Applying Gauss’s Law to the Gaussian Surface shown

Charge appearing on the four surfaces as shown in the figure 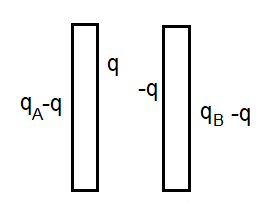 Net Field inside A due to different charges