$ \displaystyle k = \frac{1}{4\pi\epsilon_0} \: $ where εo is the electrical permittivity of free space in which the two charges are kept.

and εr = relative permittivity of the medium.

Coulomb’s Law is basically the force (F ) exerted by one electric charge on the other independent of the presence or absence of a dielectric medium containing the charge.

The net force on a charge is the superposition of Coulomb’s force and the force produced by the polarized dielectric medium.

The net force is

The dielectric constant or relative permittivity or specific inductive capacity or dielectric coefficient can also be defined as the ratio of the electrostatic force between two charges separated by a certain distance in vacuum to the electrostatic force between the same two charges separated by the same distance in that medium.

Dielectric constant has no unit.

3. The forces are central force, i.e. they act along the line joining the particles.

1. The net force on an electric charge is dependent on the medium , whereas the Newton’s force of gravitational attraction is independent of the medium.

2. Coulomb force may be attractive or repulsive but Newton’s Gravitational force is always attractive.

Example : Consider three charges q1, q2 and q3 each equal to q at the vertices of an equilateral triangle of side ‘l’ what is the force on any charge due to remaining charges. 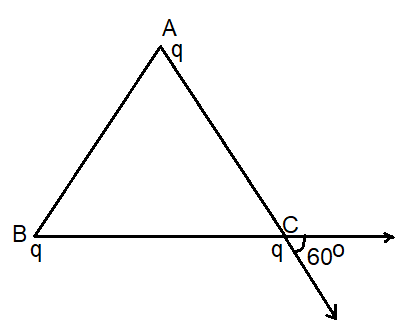 Force acting on C due to A is

Force acting on C due to B is

Net force acting on a charged particle at C is

Example : Two particles A and B having charges 8 x 10-6C and – 2 x10-6C respectively are held fixed with a separation of 20 cm. Where should a third charged particle C be placed so that it does not experience a net electric force ?

Solution : As the net electric force on C should be equal to zero, the force due to A and B must be opposite in direction. Hence, the particle should be placed on the line AB.

As A and B have charges of opposite signs, C cannot be between A and B Also A has larger magnitude of charge than B. Hence, C should be placed closer to B than A.

Suppose BC = x and the charge on C is Q

Illustration : A particle of mass ‘m’ carrying a charge -q1 is moving around a fixed charge +q2 along a circular path of radius ‘r’ find time period of revolution of charge q1

Sol:  Electrostatic force on -q1 to +q2 will provide the necessary centripetal force