Consider an incompressible, non-viscous fluid which is flowing through a tube.

Let us take a line A-B-C-D-E through which the fluid particles are successively following each preceding particle to move from A to E. 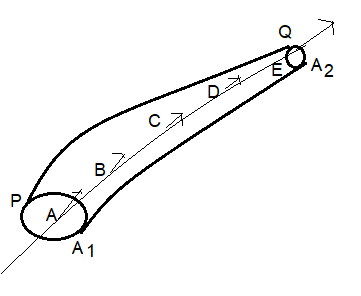 In this way the fluid particle successively reaches C, D & E and acquires the respective velocities at those positions. This reveals two things – line of motion of a stream of fluid particles is fixed and the velocities at different points are fixed with respect to time.