When a surface is immersed within a fluid at rest, the fluid exerts a force perpendicular to the surface.

This normal force acting on a small surface is proportional to the surface area of the surface in contact with the fluid.

The magnitude of the normal force acting per unit area within a fluid is called pressure.

Pressure P is a scalar quantity. Its unit in S.I. system is N/m2. It is also known as Pascal. There are several other units of pressure like bar, atmosphere etc.

Solution: The atmosphere imparts a force normal to any surface in contact with it.

How to find Variation of Pressure with depth ? 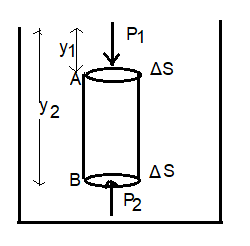 Pressure increases with depth, then Δp = ρ g Δy and

Where y increases in the downward direction & Pressure increases.

Pressure is same at two points in at the same horizontal level. As dy = 0; dp = 0

As the body is in equilibrium,

Note: P is independent of shape of container.

Solved Example:  Assuming that the atmosphere has a uniform density of (1.3 kg/m3)  and an effective height of 10 km, find the force exerted on an area of dimensions 100m  × 80 m at the bottom of the atmosphere.

Solved Example : For the arrangement shown in the figure, what is the density of oil ? 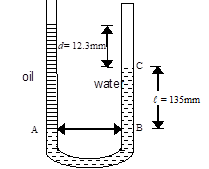 Solved Example: A water tank is 20 m deep. If the water barometer reads 10 m at that place, then what is the pressure at the bottom of the tank in atmosphere?

Solution: The pressure at the bottom is

P = P0 + hρg where P0 is the atmospheric pressure.

Solved Example: Two immiscible liquids of relative densities 1.5 and 2 are at rest in a rectangular container of dimensions 3 × 2 × 1 m. Find the force exerted on the bottom of the container due to the liquids.

Solution: The force exerted by the liquids at the bottom of the container is equal to the sum of the weights of the liquids. The weight of the liquid 1 = W1 = m1g