Second law of thermodynamics:
• Clausius statement: It is impossible for a self acting machine unaided by any external agency to transfer heat from a cold reservoir to a hot reservoir. In other words heat can’t flow by itself from a colder to a hotter body.

• Kelvin-Planck Statement: It is impossible for any heat engine to convert all the heat absorbed from a reservoir completely into useful work. In other words 100% conversion of heat into work is impossible.

• These two statements of the second law are equivalent to each other. Because, if one is violated, the other is also automatically violated.

Reversible process:
• A process which can be retraced back in such a way that the system passes through the states as in direct process and finally the system acquires the initial conditions, leaving no change anywhere else, is called reversible process. Any quasi-static process can be reversible.

Conditions for a process to be reversible:

(a) There should be no loss of energy due to conduction, convection or dissipation of energy against any resistance, like friction, viscosity etc.

(b) No heat should be converted into magnetic or electric energy.

The system must always be in thermal, mechanical and chemical equilibrium with the surroundings. (i.e the process must be quasi-static)

Examples: In practice, there is no reversible process. But approximately we can give the following examples.

(i) The process of change of static from ice into water is a reversible process.

(ii) The process of change of state from water to steam.

(iii) The gradual extension and compression of an elastic spring is approximately reversible.

(iv) The electrolysis process is reversible if internal resistance is negligibly small.

(v) Slow compression and expansion of an ideal gas at constant temperature.

Irreversible process:
• In this process the system does not pass through the same intermediate states as in the direct process.

• Most of the processes occurring in nature are irreversible.

Examples: (i) Diffusion of gas
(ii) Dissolving of salt in water
(iii) Sudden expansion or compression of gas

• The device, used to covert heat energy into mechanical energy is called a heat engine.

• For conversion of heat into work with the help of a heat engine the following conditions required.

(i) There should be a reservoir at constant higher temperature ‘T1’ from which heat is extracted. It is called the source.

(iii) There should be a reservoir at constant lower temperature ‘T2’ to which heat can be rejected. This is called the sink.

• The source and sink should have very high thermal capacity.

(a) Schematic diagram of heat engine

(b) Engine derives  amount ‘Q1’ of heat from the source.

(c) A part of this heat is converted into work ‘W’.

(e) The energy Q2 is unavailable in the universe, which causes increase in entropy of universe.

Efficiency of heat engine (η) is defined as the fraction of total heat supplied to the engine which is converted into work.

According to this, efficiency is 100% if Q2 = 0, that is no heat is rejected to the cold reservoir or sink. That is the entire heat absorbed must be converted to mechanical work, which is impossible according to Second law of Thermodynamics. 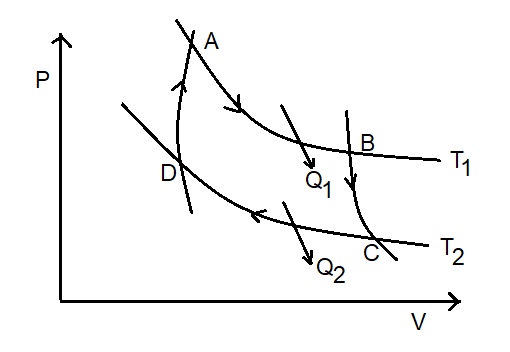 Therefore, efficiency of the Carnot engine is ,

• For Carnot engine η is independent of the nature of working substance. It depends on only the temperatures of source and sink.

• Coefficient of performance of a refrigerator