Motion means change of position with time. When a body is at rest, its position does not change with time.
But how do we describe the position of a body ? We describe it relative to another body for reference.

Thus, rest and motion are relative. A man sitting in a car moving at 55 mph on a highway is at rest relative to a co-passenger, while he is in motion relative to a person standing on the highway.

Motion can be of two types :- Translational & Rotational.

When a body moves such that it always remains parallel to itself throughout the motion it undergoes translation.

When a body moves so that each point in the body maintains a constant distance relative to a fixed axis in space, the motion is rotation.

If a particle is moves along a given straight line (Assumed along X-axis), its position is represented by the X-coordinate relative to a fixed origin. 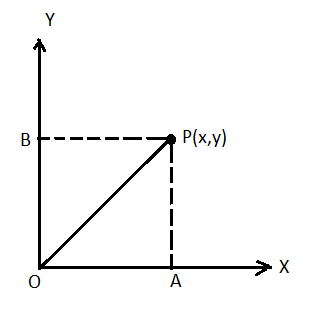 If the particle moves in a plane (Let X-Y plane) its position is completely known when the x-and y coordinates of its position are known with respect to the given coordinate axis OX and OY .

In vector notation, the position vector

in the three cases mentioned above are represented as :

Several types of coordinate frames may be used to describe position.

Two of the commonest kinds of coordinate system in use are :

If the initial ray is chosen to be OX , the point P can be described by the coordinates (r , θ) in the polar coordinate system .
The position vector

being the unit vector along

Equation (i) and (ii) relate the two coordinate systems.

The simplest system of coordinate used in 3 -dimensions is the rectangular cartesian coordinate system which consists of an origin O and three mutually perpendicular axis x, y & z.

A point P having coordinates (x, y, z) in this system has the position vector

Example : A particle is kept at the point of intersection of the diagonals. Find its position w.r.t. point O.

Exercise : In the above illustration, a plane mirror is placed along x – z plane. Find the position of the image of particle w.r.t. point O.

If a particle moves from its initial position A to a final position B , the vector joining A & B and directed along the line AB is known as the displacement vector .

The actual distance covered may have any value which is greater than or equal to the length of the straight line joining the two points A and B.

Suppose that the position vector of A =

Suppose that the position vector of B =

Example : if the ball shifts from points P to point C, find the displacement of the ball.
Where

Exercise  : In the above example, if the ball moves through 2m from P to point Q such that line PQ is perpendicular to the plane OABC, then find its displacement.

The distance covered by the particle increases with time whereas the magnitude of the displacement (the shortest distance between the initial and final position) increase, decrease or may be zero (e.g. when it passes through its initial position).

Therefore the distance travelled is never smaller than the magnitude of the displacement.

Example : A car moves from A to B on a straight road and returns from B to the mid-point of AB . If AB = 10 m. Find the displacement and distance covered .

Solution: Let A be the origin and C be the mid-point of A B

The distance covered is

Exercise  : Referring to previous example , what are the magnitudes of the displacement and distance covered when the car returns to A ?