A frame of reference may be inertial or non-inertial and this has to be borne in mind when Newton’s 2nd law of motion is applied to a body.

Any two inertial frames of reference (i.e. any two frames in which Newton’s Ist law holds) move with constant velocity relative to each other.

A frame of reference which is moving with non-zero acceleration w.r.t. any IFR is non-inertial.

Newton’s 2nd law requires appropriate modification before it is applied to an object in a non-IFR.
For analysis of different types of terrestrial motion (e.g. motion of a car), the earth is found to be a suitable inertial frame of reference. 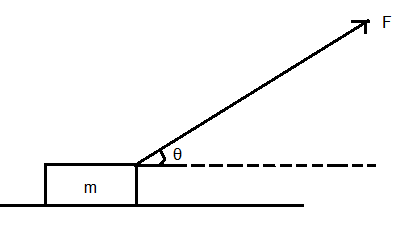 Solution: The F.B.D. of the block shows the force components.

Along X-axis, let the acceleration of the block be ‘a’

The acceleration of the block is 5√3 m/s2 directed towards right. Since F sinθ < mg & the surface is rigid, the block remains in equilibrium along y-axis.

Exercise : Two balls of masses m1 = 5 kg, m2 = 10 kg are connected by a light inextensible string. A horizontal force F = 15 N is acting on the ball m2. What is the (a) acceleration of the balls (b) tension in the string?

Example : A block of mass m1 = 2 kg is kept on a smooth horizontal table. Another block of mass m2 = 1 kg is connected to m1 by an light inextensible string passing over a smooth pulleys as shown in the figure. If the blocks are released what will be the (a) Acceleration of each block (b) tension in the string ?

Example : A man of mass M is standing on a plank kept in a box. The plank and box as a whole has mass m. A light string passing over a fixed smooth pulley connects the man and box. If the box remains stationary, find the tension in the string and the force exerted by the man on the Plank.

Solution: The fixed pulley is taken as frame of reference. The forces on man and box with plank are shown in figure.

The forces are as follows:

ii. The tension in the string = T.

iii. The normal contact force between the man and the plank = N.

iv. The weight of the plank and box = mg

Referring to figure. The equation of motion of the man is given as
T + N – Mg = M a

since M > m and the box remains at rest, the man will had to be at rest

Example : A pendulum is hanging from the ceiling of a car having an acceleration a0 with respect to the road. Find the angle made by the string with the vertical.

Solution : For the vertical equilibrium of the bob

Since the bob is accelerating horizontally,

Exercise : With what acceleration ‘ a ‘ should a box descend so that a block of mass M on it exerts a force Mg/4 on the floor of the box ?