When a body slides on a surface, the surface is observed to exert a retarding force on the body, preventing relative motion.

When an external horizontal force is applied to a body resting on a rough surface, the body does not immediately start moving : this is due to the fact that the force of friction applied by the surface on this body prevents the onset of relative motion.

Friction is an important force in several aspects of everyday life.

Sometimes, it is important to minimise friction (e.g. in the engine of a car); in other cases it is because of friction that our machines work (from nails to bicycles and cars).

The force of friction acts tangential to the surface of contact between two bodies, and acts in such a manner as to prevent relative motion.

What are the distinct types of Friction ?

Static friction: Where there is no relative motion between the bodies in contact. 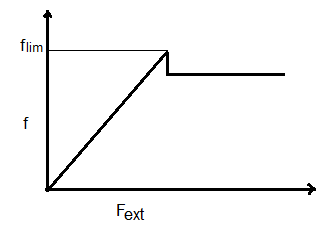 Suppose that a body is kept on a rough surface and an external force Fext is applied on the body in the horizontal direction.
The body does not accelerate initially (remains at rest) due to the fictional force f opposing.

Relative motion between the two bodies: The force f  equals the external force .

As Fext is increased,’ f ‘ increases , until it reaches a maximum value flim , also known as the Limiting Friction.

If Fext is increased thereafter, the force of friction ‘ f ‘ suddenly drops and motion commences. Friction is kinetic.

Once the body is in motion, the frictional force that acts on it is called kinetic (fk).

The normal reaction N acts on the body perpendicular to the surface. Suppose that the normal contact reaction force on a body from the ground is N.

where μs is a constant of proportionality called co-efficient of static friction.

It depends on the nature of surfaces in contact.

Where μk is known as co-efficient of kinetic friction.

The value of N in equation (i) and (ii) depends on the orientation of surfaces in contact.

What is the Angle of friction ? 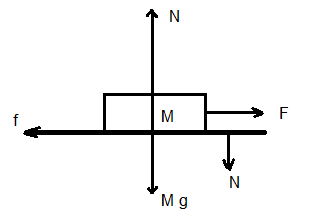 In figure, the block of mass M is resting under a maximum applied horizontal force F on a rough horizontal surface. 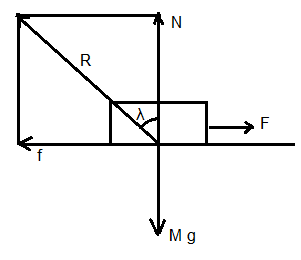 What is Angle of Repose ?

The maximum angle of inclination of an inclined plane w.r.t. horizontal for which an object will remain at rest when placed on it, is known as the angle of repose.

Suppose a block of mass M is kept on a rough inclined plane. The angle of inclination of the plane w.r.t. horizontal is gradually increased from 0°.  It is found as the angle increases, the tendency of the block slipping increases.

Ultimately just at a particular maximum angle of inclination the block is on the verge of slipping as shown in the figure. 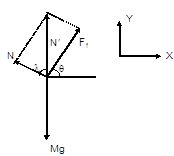 How to Calculate of Angle of Repose ?

Let λ be the angle of friction according to the definition and , the angle of repose. With reference to the chosen X-Y axis , we obtain for equilibrium under static conditions, 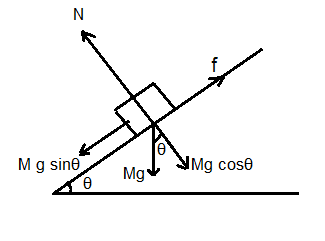 Solved Example : A block starts slipping on an inclined plane. It moves one metre in one second. What is the time taken by block to cover next one metre ? The forces acting on the block at any moment are :

Let a = acceleration of the block (down the plane)

Solved Example  : A block of mass m = 2 kg is kept on a rough horizontal surface. A horizontal force F = 4.9 N is just able to slide the block. Find the coefficient of static friction. If F = 4 N, then what is the frictional force acting on the block ?

If the applied horizontal force is F = 4 N

We known that when F < fmax the block does not slide .

The frictional force on the block is f = F = 4 Newton.

Solved Example : Two blocks A & B are connected by a light inextensible string passing over a fixed smooth pulley as shown in the figure. The coefficient of friction between the block A & B the horizontal table is μ = 0.2; If the block A is just to slip, find the ratio of the masses of the blocks.

Solved Example: The block A is kept over a plank B. The maximum horizontal acceleration of the system in order to prevent slipping of A over B is a = 2m /sec2. Find the coefficient of friction between A & B.

Solution: For the block A, fmax = m amax

amax of A = maximum acceleration of plank in order to have no slipping between A and B.