A force is a push or a pull acting on a body. It is a vector quantity : i.e. it has both magnitude & direction.

Forces are measured in SI units in Newton .  Newton (N) is that force which when applied to a body of mass 1 kg , causes an acceleration of 1 m/s2.

A system consists of bodies, whose motion is to be analysed. In this chapter we will be analysing the motion of rigid bodies.

The first classification is self explanatory.

All forces acting on a body can be classified as:

(b) Non-contact force: Bodies can exert forces on each other without actual physical contact. This is known as action at a distance. Such forces are known as non-contact forces .e.g. gravitation, coulomb repulsion between like charges, etc.

For the moment, we will deal with actual forces. Suffice it to say that there exist pseudo-forces acting in a non-inertial frame of reference.

Forces may be conservative or non-conservative depending on whether work done against them by an external agent is recoverable or otherwise . Some typical forces we will be dealing with are tension, spring force, normal reaction, etc. Some free body diagrams for these forces are shown below :

(i) Tension in a string : For a block A pulled by a string,

Where x = extension in the spring

You can use either of the above diagrams: (A) or (B) 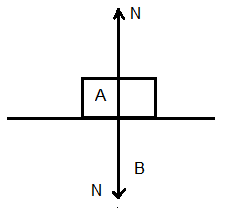 A block A rests on another block B. The normal reaction N acts between A and B as shown in the diagram.

(i) It is always attractive in nature.

(ii) It is long range force.

(iii) It is the weakest force operating in nature

(i) It may be attractive or repulsive in nature.

(ii) It is also a long rang force.

(iii) It is about 1036 times stronger than gravitational force.

(v) It is also a central force

(iii) Strong force :- It is the force of nuclear origin within the atomic nucleus, the stronger nuclear force holds the nucleons- Protons and neutrons together. It has the following properties –

(i) Basically it is an attractive force.

(iii) It varies inversely with some higher power of distance.

(iv) It is the strongest force operating in nature.

(v) It is a non-central force.

(iv) Weak force :- In the process of radioactive decay. The nucleus emits an electron and neutron . The electron and the neutron interact with each other exclusive through the weak force. The weak forces are about 1025 times as strong as gravitational forces.

Every body continues in its state of rest or of uniform motion in a straight line unless it is compelled by an externally impressed force to act otherwise.

The tendency of material bodies to maintain their velocity constant is known as inertia Mass is a measure of inertia. When an external force acts on a body, it changes its velocity.

The rate of change of momentum of a body is directly proportional to the applied force and acts in the direction of the force.

Momentum is the ‘quantity of motion’ present in a body. It is a vector quantity and for small enough velocities (v « c, the velocity of light), it is given by,

where k is a constant. With proper choice of units, k = 1

Solved Example : A body of mass m = 1 kg falls from a height h = 20 m from the ground level
(a) What is the magnitude of the total change in momentum of the body before it strikes the ground ?
(b) What is the corresponding average force experienced by it?
(g = 10m/sec2).

Solution: (a) Since the body falls from rest (u = 0) through a distance h before striking the ground, the speed v of the body is given by

The magnitude of total change in momentum of the body

Therefore we will have to find t using the given data. We know from kinematics that,

Putting the general values of ΔP & t we obtain

Every action has an equal and opposite reaction. This implies that if a force is applied by a body A on a body B, then a reaction force acts on A due to B.

Solved Example : Two blocks of mass 2 kg and 4 kg are kept in contact with each other on a smooth horizontal surface. A horizontal force of 12 N is applied on the first block due to which the pair moves with a constant acceleration. Calculate the force acting between the blocks.

Solution : Let a be the common acceleration of the blocks,

R = Force between the two blocks

From FBD of Ist block

From FBD of block 2,

A separate diagram of the body is drawn showing all the different forces exerted by the bodies in the environment. This diagram is known as the free body diagram.

Application of Newton’s Laws to any system (consisting of one or more objects) can be done by following a systematic method.

We Recommend the following steps in the order given below :

(i) Draw the complete free body diagram (FBD), showing all the forces acting on each separate body.

(ii) Select proper coordinates for analysing the motion of each body.
Include any pseudo-forces within the FBD, if required.

(iii) If there are any constraints, write the proper constraint equations.

(a) Identify the known and unknown quantities. Check that the no. of equations equals the number of unknowns.
(b) Check the equations using dimensional analysis.

(c) After solving, check the final solution using back substitution.

(vi) If the velocity (v→ ) or, position ( x→) is required, proceed from a knowledge of the acceleration ( a->) as found from equations in step (v) and apply kinematics: dv→/dt = a→ (known) and finally integrate.