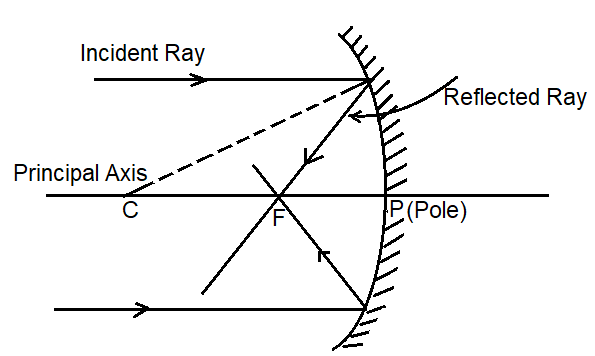 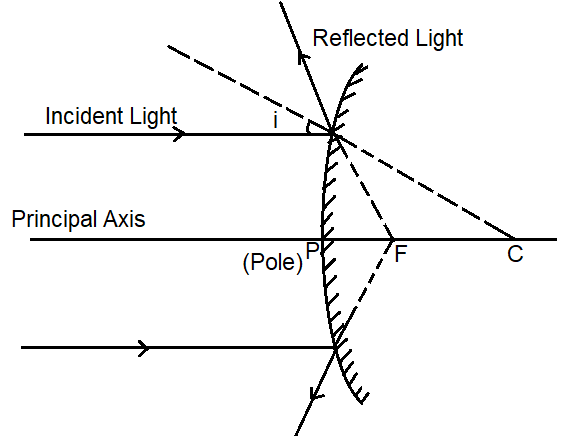 The reflection takes place in such a way that,

angle of incidence = angle of reflection

F → principal focus; where the parallel light rays meet (concave) or seems to be coming from (convex) on the optical axis

C → Center of curvature; center of the sphere, a part of which is the given mirror.

f → Focal length; the distance between the focal point F & the pole P. 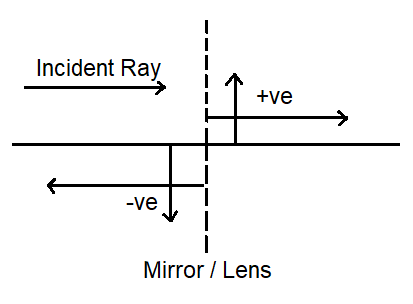 (i) All distances are measured from the pole of the mirror / lens / refracting surface which should be placed at the origin.

(ii) Distances measured along the direction of incident rays are taken as positive.

(iii) Distances measured along a direction opposite to the incident rays are taken as negative.

(iv) Distances above the principal axis are positive.

(v) Distances below the principal axis are negative.

How can the formation of images be visualized ?

Images can be visualised by drawing ray diagram. Some of the rays to be used to draw a ray diagram are listed:

(iii) A ray passing through the centre of curvature of the mirror retraces its own path.

(iv) A ray incident at the pole is reflected with equal inclination to the principal axis.

Consider the shown figure where O is a point object and I is corresponding image.

CB is normal to the mirror at B.

As M is close to P

Where f should be taken in meter with proper sign

i.e. −ve for concave and +ve for convex.

From the given data:-

Solving the above equations for v and f, we get

From equation (1) we can write

Substituting the data, we get