Reflection of Light at a Plane Surface:

We know that a ray of light is composed of packets of energy known as photons. The photons have the ability of colliding with any surface.  Thus the photons transfer momentum & energy in the same way as the transfer of momentum & energy take place between any two particles during collision. 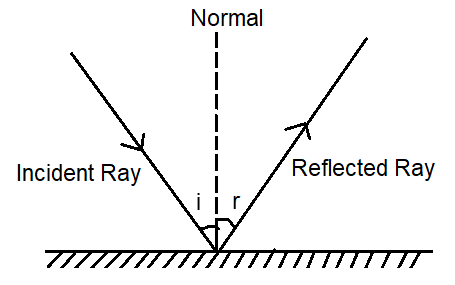 For elastic collision a particle gets rebounded with same speed where as the direction of its motion changes due to the impact (impulsive) force offered by the other colliding particle.

Similarly when a photon is incident on a fine plane surface, it gets rebounded. This is known as Reflection.

What are the laws of reflection ?

There are two laws governing the physical phenomenon of reflection.

(i) The incident ray, normal to the interface and the reflected ray lie on the same plane.

(ii)  The angle of incidence is equal to the angle of reflection. ∠i = ∠r 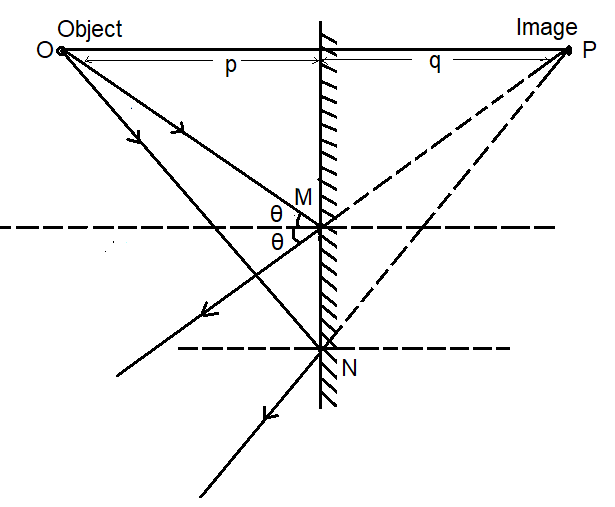 (iii) We can observe from the figure that two rays coming from a point object O are reflected at the points M & N. If the reflected rays are produced back they meet at a point P. This point P is known as image.

Since the image is formed at the back of the mirror, it is known as virtual image .
Geometrically we can see that object distance is equal to image distance from mirror surface   p = q

(a) the image is virtual erect and laterally reversed.

(b) the image size = object size

(d) when the plane mirror is rotated through an angle θ,

the reflected ray is rotated through an angle 2θ.

(e) the numbers of images formed by the combination of two mirrors inclined at an angle θ,

e.g. When two plane mirrors are placed parallel to each other , then θ = 0

Example : If an object moves towards a plane mirror with a speed V at an angle θ to the perpendicular to the plane of the mirror, find the relative velocity between the object & the image.

Velocity of the object relative to the image is given as

Example : Find the minimum length of the mirror required to visualise the complete image of the body of a person of height H.

Geometrically, AC = AB + BC where

i.e. length of the mirror is just half the height of person.

Illustration:  Show that if a mirror is rotated by angle θ the reflected ray rotates through an angle 2θ When the mirror rotates by θ , the angle between the normals is also equal to θ.

Hence the reflected ray rotates by an angle 2θ

Exercise : Find the number of images formed when two plane mirrors are placed at right angle to each other & locate the images by drawing ray diagram.

Exercise : Draw the ray diagram for the images formed by an object placed in between two plane parallel mirrors due to both the reflecting surfaces