Covalent Binding. Germanium has 32 electrons distributed as 2, 8, 18 and 4. It has four balance electrons. Each atom is surrounded by four atoms at equal distances from it, lying on the four corners of a regular tetrahedron, the atom itself being at the centre.

Electrons & Holes in an Intrinsic semiconductor

Due to covalent binding in Germanium, each atom behaves as if it has eight valence electrons. The valence electrons occupy filled valency band (V) and the conduction band (C) remains completely as shown in figure.
The two bands have an energy gap of 0.75 eV.
At absolute zero, intrinsic semiconductor behaves as an insulator. 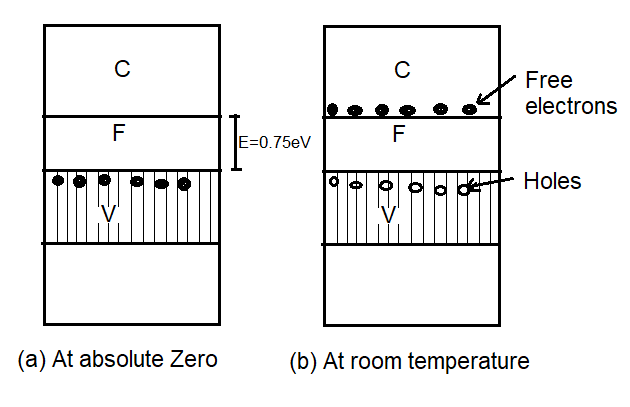 The number of electrons in conduction band increases with the rise in temperature.
The electrons leaving the valence band to enter conduction band, leave behind an equal number of vacant sites near the top of the valance band as shown  .  These vacant sites are called holes. These holes, representing an electron vacancy, have a positive charge.

When an electric field is applied to an intrinsic semiconductor, electrons in valence band gain energy and they move to fill up the empty energy levels produced by the presence of holes.

Definition. A pure semiconductor, made deliberately impure, by adding to it some impurity element, is called an extrinsic semiconductor.  Its electrical conductivity becomes more.

Description. Germanium has 4.52 x 1022 atoms per cm3 . An addition of only one impurity atom per million (106) Ge atoms, is sufficient to give desired conductivity to it.

Preparation. An n-type Ge is obtained by adding a small quantity (one-millionth part) of a pentavalent impurity like phosphorous (15), Arsenic (33), Antimony (51), Bismuth (83) to a Ge crystal. Generally Arsenic (As) is taken for this purpose. 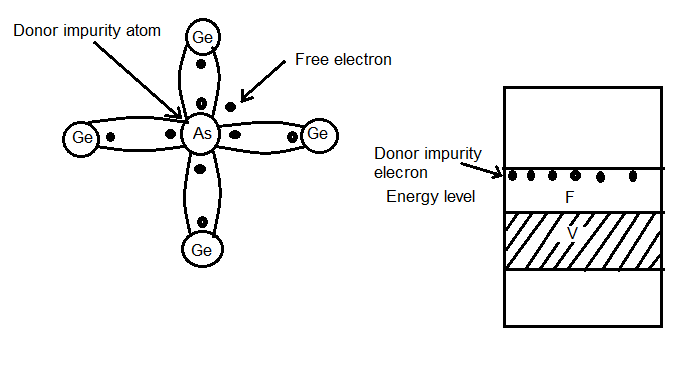 Preparation: A p-type Ge is obtained by adding a small quantity (one millionth part) of a trivalent impurity like Boron (5), Aluminium (13), Gallium (31), Indium (49) or Thalium (81) to a Ge crystal. Generally Indium (In) is taken for this purpose. 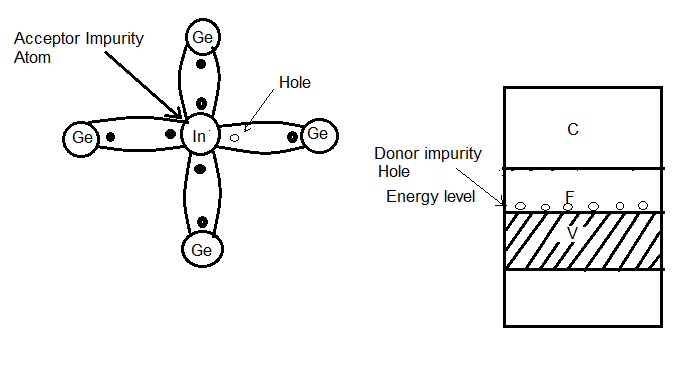 The energy level of this hole is slightly more than the highest energy level of the valence band as shown in figure .
These holes (1 per impurity atom and 4.52 x 1016 per cm3) considerably increase the extrinsic conductivity.
Since holes with positive charge help in current conduction, the impure Ge is called p-type.

In a doped semiconductors ,