What is Energy Band ?

In an atom, electrons revolve round the nucleus in almost circular orbits of different radii representing shells and subshells. Energy of electron in each subshell is definite.  These definite energy values are called energy levels of the atom.The energy levels (values) of electrons in outer shells are influenced by the presence of nuclei of other atoms.

Due to interatomic interaction, there is a considerable modifications in the case of energy levels of electrons in outer shells .
Thus energy level line becomes broad  . The collection of closely spaced energy levels is called Energy Band .

(i) This band is always filled with electrons.

(ii) This is the band of maximum energy.

(iii) Electrons are not capable of gaining energy from external electric field.

(iv) No flow of current due to electrons present in this band.

(v) The highest energy level which can be occupied by an electron in valence band at 0 K is called Fermi level.

The higher energy level band is called the conduction band.

(i) It is also called empty band of minimum energy.

(ii) This band is partially filled by the electrons.

(iii) In this band the electrons can gain energy from external electric field.

(iv) The electrons in the conduction band are called the free electrons. Current flows due to such electrons.

Conductors (Metals) : In case of conductors, the last occupied band of energy levels is only partially filled. The available electrons occupy one by one, the lowest levels (Pauli’s exclusion principle).
This leaves part of this band, called conduction band, unoccupied. The conduction band (C.B) and the valence band (V.B) (lower completely filled band) overlap .

Insulators : In case of insulators, the empty conduction band (C) (unoccupied band) and the valence band (V) have an energy gap (Eg) of about 6 eV as shown .  The band that separates two bands (C and V), is called Forbidden band (F). 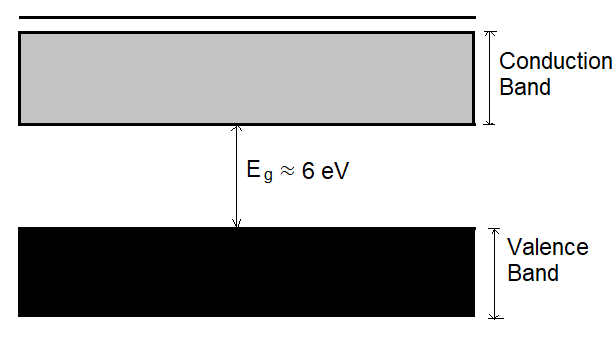 Due to large energy gap, no electrons are promoted from valence band to empty conduction band. Valence band remains completely filled.
An important example of insulator is diamond with energy gap of about 5.4 eV.

Semiconductors : In case of semiconductors, the empty conduction band (C) (unoccupied band) and the valence band (V) have an energy gap (Eg) of about 1 eV as shown in figure .  The band that separates the two bands (C .B and V.B ) is called Forbidden band (F).
Common examples of semiconductors are Silicon (14) and Germanium (32) with energy gaps of about 1.12 eV and 0.75 eV respectively.