From earlier discussion, it is now clear that when a particle is disturbed from its stable equilibrium, it oscillates to and fro about that position.

Let us consider such an oscillation on a straight line. If x represents the displacement of the particle from equilibrium position, then acceleration of the simplest possible motion can be given by

(i) proportional to the displacement.

(ii) directed towards the equilibrium point.

A motion showing such a feature is known as simple harmonic motion.

Instead of straight line motion, if particle or centre of mass of body is oscillating on a small arc of circular path, then condition for angular SHM is

where k is a constant of proportionality

similarly, from (2), for angular SHM

where C is a constant of proportionality.

If a body oscillates between P and Q with O as equilibrium position in accordance with equation (3) and (4) then for force (or torque), we can get plotting as shown in the figure. 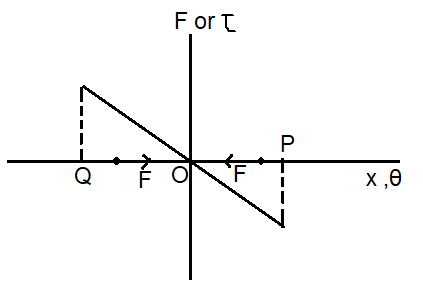 Such force is often called as linear restoring force.

Term linear is used to highlight the fact that force is proportional to first power of x.

Equation of Motion of S.H.M

Solution of this differential equation is

Potential energy of particle executing SHM is given by

Exercise : For a particle in motion, it is known that its potential energy is directly proportional to x2 where x is the displacement from a fixed point. Can we say that it will always execute SHM ?

Illustration : The linear displacement (x) of a particle varies with time as x = A sinωt + Bcosωt . State whether the particle is executing SHM or not.