Length of the simple pendulum is the distance between the point of suspension and the centre of mass of the suspended mass. 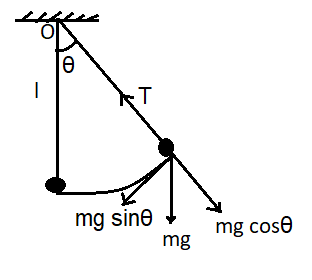 Consider the bob when string deflects through a small angle θ from equilibrium position.

Forces acting on the bob are tension (T) in the string and weight (mg) of the bob.

Torque on the bob about point O is

Note: If acceleration of non-inertial frame with respect to inertial frame is not in vertical direction then in equilibrium position, the string of pendulum makes some angle with vertical.

Exercise  : Find the time period of a simple pendulum of length l suspended from the ceiling of a car moving with a speed v on a circular horizontal rod of radius r.

Exercise  : Find the time period of a simple pendulum of length L having a charge q on its bob when the pendulum is oscillating in a uniform electric field E directed (a) parallel to g (b) perpendicular to g

Exercise  : A hollow metal sphere is filled with water and a small hole is made at its bottom. It is hanging by a long thread and is made to oscillate. How will the time period change if water is allowed to flow through the hole till the sphere is empty.