The term interference refers to any situation in which two or more waves overlap in space. When this occur, the total wave at any point at any instant of time is governed by the principle of superposition , which states:

When two or more waves overlap the resultant displacement at any point and at any instant may be found by adding the instantaneous displacements that would be produced at the point by the individual waves if each were present alone.

Interference effects are most easily seen when we combine sinusoidal waves with a single frequency f and wavelength λ.

What is the Conditions for sustained interference ?

(a) The initial phase difference between the interfering waves must remain constant.

(b) The frequencies and the wavelengths of the two waves should be equal. If not, the phase difference will not remain constant and so the interference will not sustain.

(c) The light should be monochromatic. This eliminates overlapping of patterns as each wavelength corresponds to one interference pattern.

With sound waves, as we have studied, the interference pattern can be observed without much difficulty because the two interfering waves maintain a constant phase relationship; this is also the case with the microwaves.

However, for light waves, due to the very process of emission, which is at atomic level one cannot observe interference between the waves from two independent sources . It can be obtained by deriving two interfering sources from the same source.

The methods to achieve this can be classified under two broad categories as :

(i) Division of wave front

In the first case two interfering beams are produced from the same wave front and in the second case intensity of a beam is divided to produce interference.

We consider two identical sources of monochromatic waves S1 and S2 along the y-axis , equidistant from the origin.

Consider a point ‘a’ on X-axis. From symmetry the two distances from S1 to a & S2 to a are equal; waves from the two sources thus require equal times to travel to a. 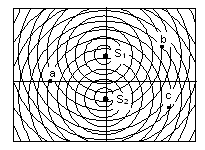 Hence waves that leaves S1 and S2 in phase arrive at ‘ a ‘ in phase. The two waves add and the total amplitude at ‘ a ‘ is twice the amplitude of each individual waves. This is true for any point on the x-axis. 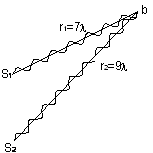 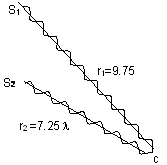 A wave from S1 arrives at b exactly two cycles earlier than one emitted at the same time from S2 and again the two waves arrive in phase. As at point O, the total amplitude is the sum of the amplitudes of the waves from S1 and S2.

For constructive interference to occur at P, the path difference (= r2 − r1 ) for the two sources must be an integral multiple of the wavelength λ

At point C ,  r2 – r1 = − 2.5 λ , which is a half-integral number of wavelengths waves from the two sources arrive at point C exactly a half cycle out of phase.